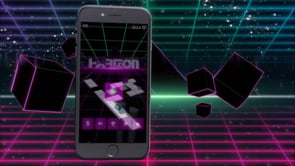 In Neon Horizon, players must jump over, slide under or teleport through obstacles as they cross their path, and score maximum distance to unlock new worlds. Along the way, they can collect power-ups and Trings as they navigate this insane neon universe.

Neon Horizon is incredibly simple to play but hugely addictive, with beautiful levels adapted to the game’s 10 unique characters, each waiting to be unlocked. Built in an isometric style, it has a retro 80s feel and a superb pumping soundtrack.

Players’ progress can be saved to the Cloud – which means they can continue to advance through Neon Horizon on different devices – and playing against Facebook friends has never been easier, with the inclusion of in-game leaderboards.

“The AppBox team has worked incredibly hard to bring Neon Horizon to life, and we’re confident that players will love it,” said Mike Davison, product and strategy director, AppBox Media. “Our graduate developers have turned a pet project into an outstanding and insanely addictive game, and we’re excited to get it to the market.”

AppBox Media’s most recent game, Panic Drop, was a hit across the globe, bagging the number one spot on Apple iTunes (action and adventure games) in 11 different countries, and the top-ten in 60 other countries. The company has also found great success with other games such as Frenzy Fox, Run Raptor Run and BeeBop.

Neon Horizon is available for instant download on smartphone and tablet, and comes in English, French, German, Chinese and Spanish language versions.