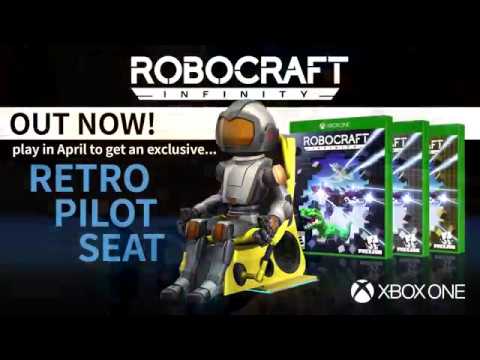 Independent games studio Freejam announced that their first console release Robocraft Infinity has launched exclusively for Xbox One and is currently available via the official Xbox Games Store.

Robocraft Infinity is the first independently developed title to launch straight into Xbox Game Pass and empowers players to build awesome robots block-by-block, share their creations online and take them into fast-paced 5 vs 5 battles with their friends.

Jet cars, tanks, flying warships, helicopters, drones, dinosaurs, scorpions – anything is possible to build and no two battles are ever the same, as you never know what foe you will face next.

Additionally all those that play Robocraft Infinity during launch month (April 2018) will also receive an exclusive Retro Pilot Seat cosmetic. This is a way of Freejam thanking all early adopters for their support, regardless of whether they have purchased Robocraft Infinity outright or played the game via Xbox Game Pass.