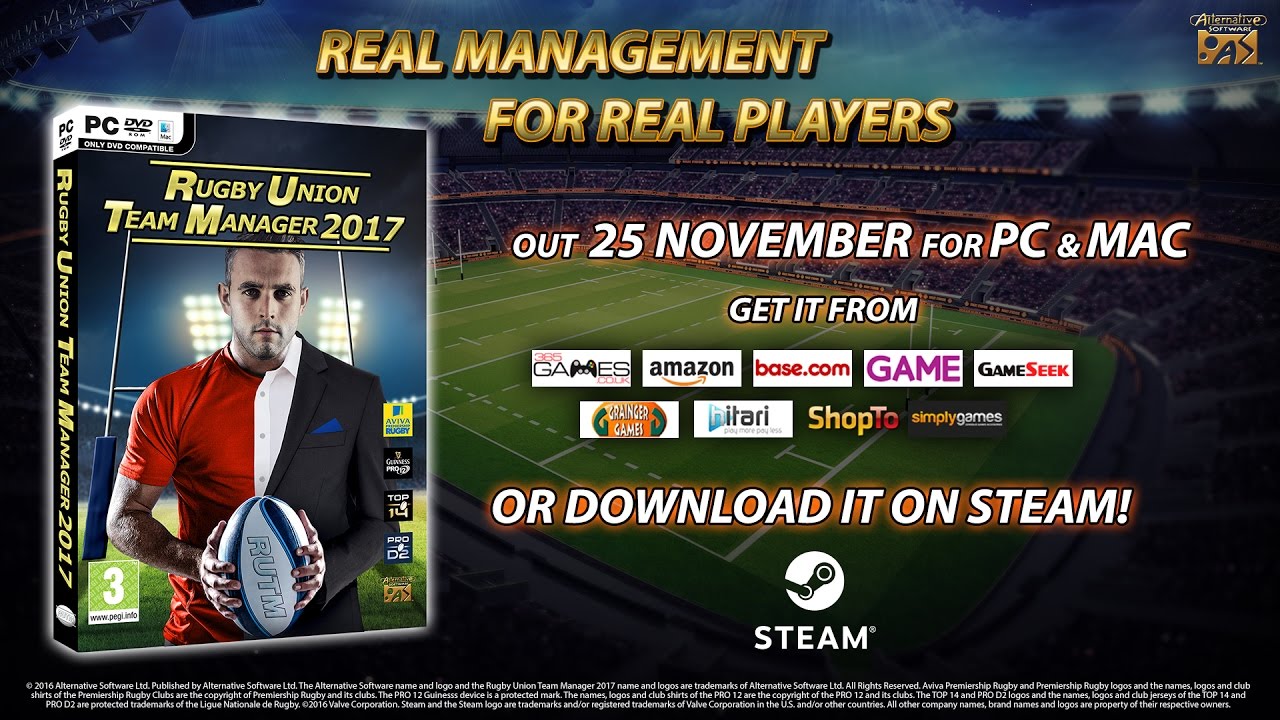 Alternative Software Ltd. confirm that Rugby Union Team Manager 2017 for PC and Apple Macintosh will be released in the UK on the 25th of November 2016, and will be available both as a retail boxed version, and via digital download.

Some of the many features and enhancements in Rugby Union Team Manager 2017 include:

– New Player Progression System: Recruit raw teenage talent and nurture them through the colts, and through the academy. Then watch them blossom in the main squad and throughout their career into representative and international rugby.

– In Depth Transfer Market: featuring players from the best leagues, and competitions from around the World. Opt to splash out on transfer list stars, or chose to hunt out a bargain, amongst the out of contract players. With over 18000 players and 323 clubs to select from!

– New Manager Profiles: You can select to be a “shorts & whistle, training paddock” type manager, or a “suit & tie, negotiation room” type manager.

– Manage your favourite team – and progress to manage International teams, to further test your skills with the very best in the Sport.

– New Negotiation Mechanisms: Use your club’s status to leverage favourable deals to present to the Chairman and the board. Get involved with your club’s sponsorship, from the new small business deals, to large corporate sponsorship options, with the game’ new comprehensive financial receipt and expenditure features.

– New 3D match engine, which allows you to fully adapt tactics and playing styles from the touchline, all while the match is in progress.

– Scaling Stadiums: When the right time comes and the club has the finances available, steadily upgrade your stadium to an international sized arena. Look to improve all your facilities including: – Gymnasium, Training Paddock, Equipped Enclosure, Physio Suite, Tactical Briefing Room, and The Clubhouse.

– Career Continuation – but if the Chairman’s axe should fall, you can assess your options, and look to get a new job offer.

The fans have been heard! We are happy to say that many improvements, as asked for by Alternative Software’s Rugby gaming community have also been implemented into the game, resulting in a much more polished, realistic simulation of what it’s like to be a Rugby manager.