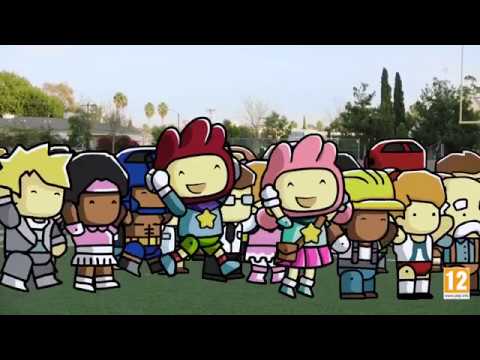 Up to four players can face off and imagine their way to victory in Showdown Mode, utilising Scribblenauts™ Showdown’s vast dictionary to outsmart their opponents. With over thirty-five thousand words, almost any object can be conjured as players travel across a board game style map taking part in over twenty-five mini-games. ‘Wordy’ games require imagination to utilise the best object or character in a variety of scenarios, while ‘Speedy’ games pit players against each other in a race to complete an assortment of humorous challenges. With card-based skills and strategies unleashed throughout Showdown Mode, each game is unpredictable, keeping the fun flowing until the end.

One or two players can also experience each of Scribblenauts™ Showdown’s unique mini-games in Versus mode, going head-to-head in special challenges such as: a madcap medieval duel fought with conjured weapons, or a ferocious tower battle where players must hurl anything they can imagine at their opponent’s fortress. Players will also experience wood-cutting shenanigans, tug-of-war brawls, and a fast-paced eating contest, with a Scribblenauts™ twist.

The Scribblenauts™ series’ beloved Sandbox mode also returns. Players can create almost anything they can imagine while earning achievements and Starites across eight unique levels. This mode can be experienced solo or with a friend, leading to hilarious hijinks as objects and creatures collide in surprising ways.

Players can choose or create their own original Scribblenaut with dozens of customisation options. By competing in the various game modes and earning Starites, new wacky accessories, hair styles and clothing can be unlocked, offering an endless range of creative possibilities.