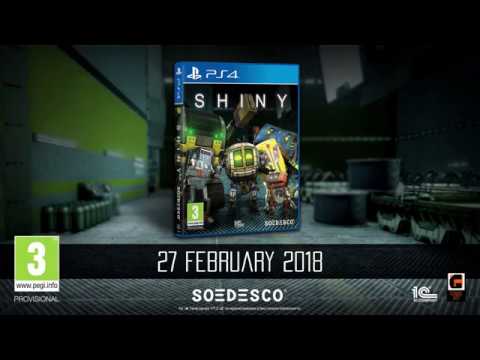 Indie platformer Shiny made its debut on PlayStation®4. The game is available in digital and physical stores. Shiny tells the heartwarming story of a robot named Kramer 227, who needs to escape the ill-fated planet of Aurora together with his robot friends. The family-friendly game, developed by Brazilian studio Garage 227, is admired for its amazing music and old school vibe.

What makes Shiny stand out?
An appealing aspect of Shiny is its compelling story, which is all about helping others instead of killing. Hardcore Gamer: ‘’It’s rare to find video games that instill a sense of hope and purpose without the need for killing. (…) Shiny is a special game’’.

Keengamer applauds Shiny for its appealing main character: ‘’Shiny is an engaging and conceptually impressive debut with a likable protagonist that lovers of sci-fi, robots, and 2D platformers will gravitate towards effortlessly’’.

That main character is the result of a lengthy creative process of drawing and designing. The original concept drawings of Kramer 227 reveal that robots come in many shapes and sizes! Fun fact: The name of Shiny’s developer, Garage 227, was chosen to honor their first main character Kramer 227.

Shiny’s message to the world
The main premise of Shiny is that life and energy are precious resources. Every move Kramer makes consumes energy, which can be replenished by collecting batteries or finding generators. Collecting enough energy is essential to keep Kramer and his friends alive long enough to escape planet Aurora before it crashes into a blazing sun.