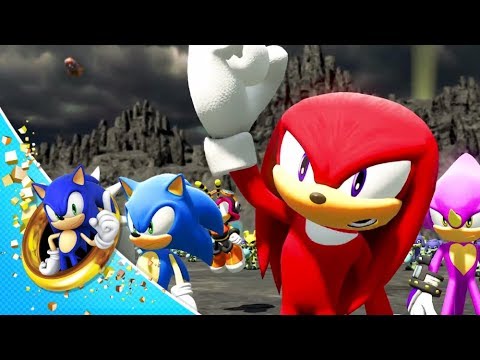 Calling all heroes! Sonic Forces™, the fast-paced action platformer from the team that brought you Sonic Colours™ and Sonic Generations™, is available. The game launches with a Day One Patch that has several updates, including a change to the ring system, which allows players to recollect rings after being hit. Sonic Forces can be purchased now for Nintendo Switch, PlayStation 4, Xbox One and PC.

For Shadow fans, the free Episode Shadow Add-On is also available. The Add-On focuses on the mysterious backstory between Shadow and Infinite and includes an additional three Shadow stages, plus the ability to replay as Shadow in over 10 Modern Sonic Stages. Those who preordered the Sonic Forces Digital Bonus Edition or the Sonic Forces Physical Bonus Edition from retailers* participating in the pre-order scheme will receive a Shadow costume for their Hero Character.

For those who haven’t purchased Sonic Forces yet, Physical and Digital Bonus Editions for Sonic Forces are still available for a limited time. Both Bonus Editions come with the SEGA/ATLUS Pack Add-On, which offers a variety of in-game outfit items and accessories to recreate the look of five other SEGA/ATLUS icons for your Hero Character, so buy now while it is still available!

In Sonic Forces, players speed through rolling ruined landscapes as Modern Sonic, catapult past perilous platforms as Classic Sonic, and use powerful new gadgets as their own Custom Hero Character. Battles feature iconic enemies and powerful new villains, including Dr. Eggman, Zavok, and Metal Sonic leading up to a fight against Sonic’s most powerful enemy yet, Infinite.

For those who want to get an extra dose of Sonic Forces, download and play the real-time multiplayer mobile game Sonic Forces: Speed Battle today on the App Store for iPhone and iPad – coming to the Google Play Store for Android devices on November 16th.