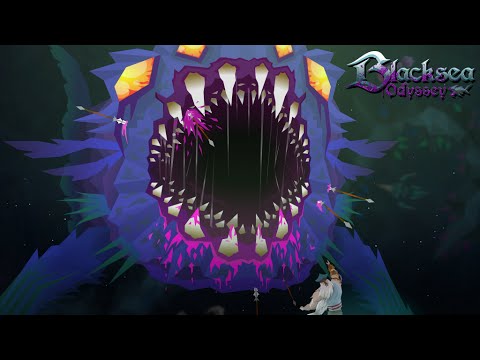 Team Blacksea Odyssey announces that Blacksea Odyssey launches on Steam Early Access on March 2, 2016. The game is currently in a closed Beta that Early Beta Kickstarter Backers can playtest. The team updates the Steam build every 7 days and will do so until the game’s launch later this Spring.

Blacksea Odyssey is a 2D top-down shoot ’em up with RPG and rogue-like elements. It carries with it a blend between old school arcade shooters, newer RPGs, rogue-likes, and a modernized design with a heavy emphasis on replayability.

Play as the cybernetic Old Man who has entered the deadliest competition in the galaxy – the Blacksea Odyssey! Four of the bravest huntsman compete in capturing bounties for the largest space creatures that exist! Only the sole champion of the competition is awarded the honor of encountering the Titan of the Stars! Legend says no one has ever lived to tell a tale about the Titan. Will the Old Man be the first?

+ Sail the dangerous, interstellar depths of the Blacksea galaxy
+ Rip massive space creatures to shreds with a harpoon and rune-infused spears
+ Unearth hundreds of runic technologies and combine them to craft the ultimate weapon

Once a decade, the greatest huntsmen in the universe gather to compete in a legendary tournament known as the Blacksea Odyssey. Armed with only a spear and a harpoon, hunters must battle against creatures of colossal size and unimaginable terror. Using wit and skill, the huntsmen must identify the weaknesses of their foes in order to exploit them or die trying. Steeped in blood, ancient treasures, runic technologies, and a madness that wills them to enter deeper into the black abyss, these huntsman compete for a chance to claim the ultimate glory of facing a creature of such magnanimous size and insatiable ferocity that its wingspan has been said to stretch across galaxies while it’s breath consumes black holes; the Titan of the Stars! But does such a great huntsman exist….

The four great huntsman traverse through a crowd of cheering fans as they head to the space-docks to embark on their journey.

Blacksea Odyssey is a 2D top-down shoot ’em up with RPG and rogue-like elements. It carries with it a blend between old school arcade shooters, newer RPGs, rogue-likes, and a modernized design with a heavy emphasis on replayability.

A vast sort of cumulative imagination has inspired us to create a dark and beautiful experience with lush otherworldly spacescapes, dangerous behemoths to rend, and a twitch-based stream of rapturous delight. With Blacksea Odyssey we wanted to create something truly original. While inspired by many of our favorite games, we believe our vision of Blacksea Odyssey separates itself from games of similar genres while still staying true to it’s core; a fast-paced space shooter. Imagine if you will Shadow of the Colossus’s massively scaled bosses, Geometry Wars extremely crisp and fluid control scheme, Path of Exile’s deep RPG-like rune system, and Binding of Isaac’s insane replayability. While many games have influenced the design of Blacksea Odyssey, these games have had the heaviest impact.

◾Eviscerate your opponents with an onslaught of weapon loadouts and item customizations. Discover new weapon and ship runes to demolish your enemies with. Pick from an assortment of huntsmen each with their own unique characteristics to become the next great challenger in the Blacksea Odyssey.

◾Choose from a variety of spacescapes to explore. Each with their own unique set of creatures to hunt, mysteries to discover, and ancient runes to unearth. From character dialogues and the environment to enemy spawns and loot drops, everything in the game is procedurally generated and is affected by your choices. Travel deeper into the abyss at your own peril; the Blacksea is not for the feint of heart.

◾Prepare yourself for a steep difficulty curve. While picking up the game is fluid and easy in it’s earlier stages, the later parts require a mastery of mechanics both inside and out. Enemies become ferocious and unyielding, and bosses continue to adapt and grow until eventually becoming seemingly insurmountable. Intelligent strategy and fast reflexes will be required to overcome these colossal creatures.