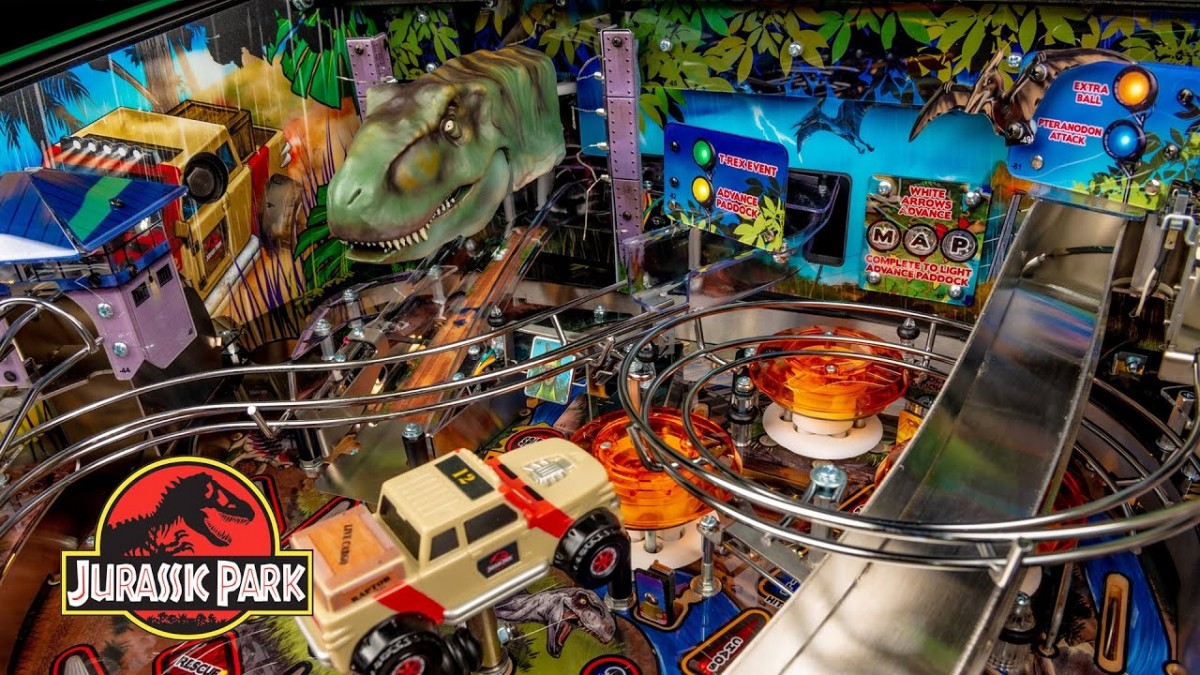 Like the blockbuster movie, the Jurassic Park pinball experience generates heart pounding excitement as the player progresses through the game. As the game starts, the player is transported to Isla Nublar, an amusement park where escaped dinosaurs are running amok! The player’s mission is to rescue park staff and recapture dinosaurs from the chaotic environment unleashed by Dennis Nedry’s computer virus. All dinosaurs, however, are not created equal as players will battle Raptors and the mighty T. Rex! The game immerses players in the fun world of battling dinosaurs in an action-packed adventure filled with twists and turns.

The Premium and Limited Edition models feature an amazing animatronic ball-eating, ball-throwing T. Rex that interacts with the ball and the player. These models also include an interactive Raptor and Raptor Pen featuring a ball-lock mechanism guarded by a motorized gate. The action does not let up with unique mosquito-in-amber pop bumpers and a custom metal horizontal helicopter spinner.

“Jurassic Park is a classic film featuring what everyone loves­­­­­ – dinosaurs! The game is designed to be easy to play, but difficult to master,” said Gary Stern, Chairman and CEO of Stern Pinball, Inc.

Pricing and Availability:
Manufacturer’s Suggested Retail Price:
MSRP for sales to USA end-users, before any VAT, GST, Sales Tax, Duties, or other taxes.

Pro Model: $US 5,999
Premium Model: $US 7,599
Limited Edition Model: $US 8,999 Jurassic Park pinball is available through authorized Stern Pinball distributors and dealers around the world.