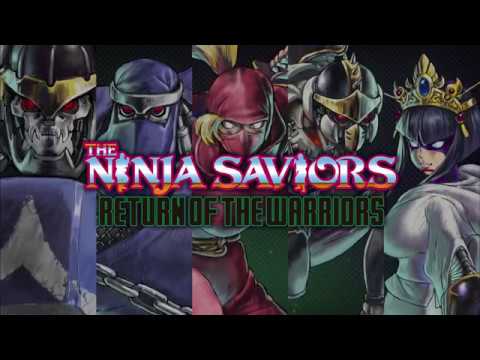 ININ Games, publishing label of United Games GmbH, announced The Ninja Saviors – Return of the Warriors, Taito’s iconic and classic sequel to the arcade hit, which has already been highly acclaimed in Europe, is out in North and South America. This much-revered brand will excite fans of the genre and pull in a whole new generation of gamers. The Ninja Saviors – Return of the Warriors releases on Sony PlayStation 4 and Nintendo Switch 19.99 USD digitally and the physical edition, with additional items, will be 29.99 USD.

The Ninja Saviors – Return of the Warriors,  a side-scrolling arcade brawler, features a strong cast of five playable characters and a plethora of individual moves, with two completely new faces joining the team.  For even more gripping immersion fans can experience the eagerly awaited, and superb, two-player co-op mode and an online ranking system so that you can measure yourself against fighters from all over the world. In a total of 8 levels, players will brawl their way through waves of enemy hordes, either alone or in pairs.

Players assume the role of one of the five android ninjas to take on the tyrant Banglar and his henchmen with a variety of individual moves in a dystopian future.

A completely uncut and mesmerizing experience is presented and options to change the color of hit effects are just a few of the surprises in store supplemented by new enemies previously not seen on the original Western Super Nintendo version. Importantly the original developers, TENGO PROJECT, have improved the audio-visuals in every respect, making an already outstanding game even better!

This six-minute trailer gives an insight into some of the new features and characters that are presented in The Ninja Saviors – Return of the Warriors.