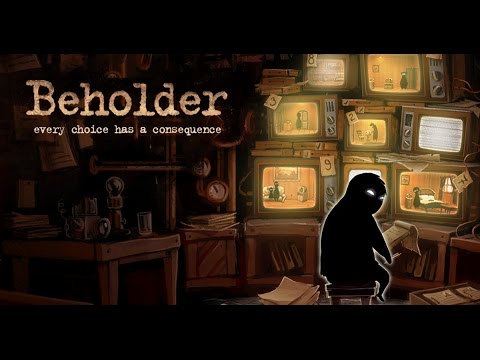 Alawar and Warm Lamp Games today announced that a dystopian simulator Beholder will launch on Steam for PC, MAC and Linux on November 9. In Beholder you play as Carl, a state-installed Landlord living in a totalitarian State who must spy on tenants, eavesdrop on them and place wiretaps and cameras to build profiles and report on anyone capable of plotting subversion against the State. You MUST! But WILL you?

“Every choice in Beholder has a direct consequence, as you live in a dystopian future where a totalitarian State owns your life, laws are oppressive, surveillance is total and privacy is dead”, said Evgeny Sister, Producer at Alawar. “Actions during Beholder require a moral decision – as a family man, do you report on a doctor, who may be an underground revolutionary? But what if he is the only one able to heal your child?”

As Carl, the landlord of an apartment house employed to serve the state, new tenants are moving in and out, and at first impression, your daily routine is simply to make the property attractive to its tenants. Little do they know that as a servant of the the state you have ulterior motives and will use any means available to observe, whether it’s spying, eavesdropping or wiretapping as you build tenant profiles to report any illegal activities to the authorities.

Inspired heavily by George Orwell’s groundbreaking 1984 the philosophical narrative of Beholder, opens up questions around issues of social and moral values. If you are given power to destroy privacy, should you follow the orders of the giver? Or should you treat those that you spy on the way they deserve? Who decides what is deserved? And what if two different people deserve to be saved, but one has to go? Who will you choose?