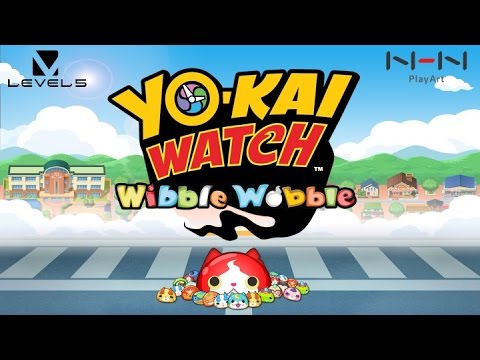 We are proud (and way too excited) to let you know that YO-KAI WATCH™ Wibble Wobble, inspired by the incredibly popular Disney XD TV series YO-KAI WATCH™, is coming soon to a mobile device near you. A joint production between LEVEL-5 and NHN PlayArt, YO-KAI WATCH Wibble Wobble is an intense yet extremely cute mix of puzzle and RPG mechanics:

Jibanyan, Komasan, and other favorite Yo-kai have turned into wibbly wobbly, bite-sized Wib Wob! Level up individual Yo-kai, explore the world of Springdale, and defeat Yo-kai to befriend them.

How to Play:
1. Swipe to connect Wib Wob of the same kind to form a larger Wib Wob. The faster you connect, the faster you fill your Fever Gauge.
2. Tap large Wib Wob to deal damage to enemies. The larger the Wib Wob, the more damage it deals.
3. Defeat trouble-making Yo-kai, and they might become your friends! If you befriend a Yo-kai who’s already your friend, that Yo-kai will earn skill points.
4. Strategically arrange your Wib Wob roster to win. Arrange them well to receive added bonuses.

The Japanese version of the game was released last October. One of the top 5 grossing apps in Japan, it quickly amassed 6 million total users and earned a 4.5 star rating.

THE STORY SO FAR
One day while searching for bugs in the woods, an average boy named Nate comes across a peculiar capsule machine. He opens one of the capsules and brings forth Whisper, the Yo-kai butler who gives Nate a device known as the Yo-kai Watch. Using this device, only Nate is able to identify and see various Yo-kai that are hanging around town causing mischief. Yo-kai are invisible beings and the cause of your everyday annoyances: Have you ever felt the sudden need to run to the restroom? Do your socks go missing in the dryer? How about the uncontrollable urge to reveal secrets?

Joined by Jibanyan, a lazy but cute cat Yo-kai, Nate and Whisper start befriending all sorts of Yo-kai. Each time Nate befriends a Yo-kai, he receives a Yo-kai Medal as a sign of friendship. Using the medals, Nate can summon his Yo-kai friends to help him solve problems around his town of Springdale.

KEY FEATURES
— Connect & Pop: Swipe to connect Wib Wob of the same kind to form a larger Wib Wob. The faster you connect, the faster you fill your Fever Gauge!
— Befriend & Collect: Defeat enemies, befriend them, and add them to your Wib Wob collection.
— Strategize: Place the best combination of Wib Wob on your roster for added bonuses.
— Soultimate Moves: Fill your Soul Meter to unleash powerful Soultimate Moves and take out your enemies.
— Fever Mode: Fill your Fever Gauge and enter Fever Mode rendering you invincible from enemy attacks for a set amount of time.
— Level Up: Gain experience and increase your Wib Wob level for improved damage and stats.
— Missions: Complete existing and new missions to earn Y-Money and unique items.
— Crank-a-kai: Use earned Y-Money and take your chance at the Crank-a-kai.
— Explore: Traverse new levels and explore an entire world filled with Yo-kai.
— Events: Updated monthly themed events with unique levels and items.
— Medal: Scan your Yo-kai Medals for in-game vanity items.
— Social: Add friends and race them to the top of the leaderboard!

PRICING & AVAILABILITY
YO-KAI WATCH Wibble Wobble will be released simultaneously on iOS and Android smartphones and tablets on Thursday, March 24th in the U.S., Canada, and Australia. The game will be free to play and will include in-app purchases.