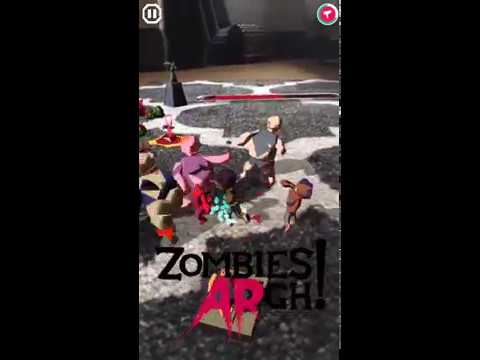 Now everyone can see zombie hordes in their living room with the new Augmented Reality (AR) shooter, ‘zombies! ARgh!’ from Me,We Studios.

‘zombies! ARgh!’ is a frantic shoot-em-up that plays out on your coffee table, kitchen floor, desk, yard – wherever there’s a flat surface for zombie destruction to erupt! Battle relentless hordes of the undead, armed with flame throwers, laser guns, rocket launchers and grenades.

Playing in AR means you are in total control of the viewpoint, moving physically right into the action for close up carnage or pulling right out to see where the blighters are coming from. AR brings a whole new dimension to battling zombies!

For non-AR enabled devices there is a more conventional mode where you can have just as much fun obliterating zombies on your device.

· Watch as zombie hordes invade your world! Using Apple’s AR Kit, zombies! ARgh! turns your home, garden or workplace into a zombie battlefield!
· Defend yourself with a vast armoury including shotguns, flame throwers, rocket launchers and more
· Call in ‘Buddies’ who will lay into the hordes to create distractions, defend your position or just brawl alongside you!
· Pick-up health, damage boosters, coins and ammo
· Make full use of the battle-zone and collect ammo, damage boosters and health pick-ups
· Hear every explosion with stunning 3D audio

Amir Latif, Studio Head said: “We’re really excited to work in the AR field and announce another self-published game of an original intellectual property as Me,We Studios. We’re delighted to be able to make full use of Apple’s AR Kit. We hope to be able to add even more creativity to the title with updates to the gameplay and content.”

zombies! ARgh! is available to download from the Apple App Store