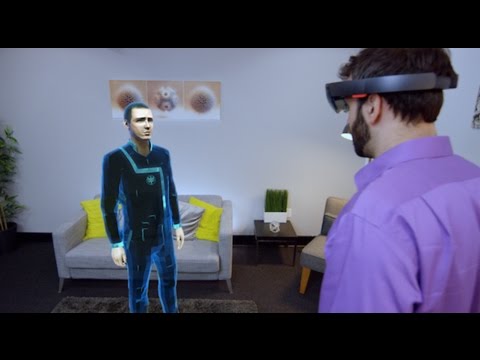 Asobo Studio and Microsoft have a rich history, and we were thrilled to partner with Microsoft to bring these holographic experiences to life in a way that uniquely showcases the capabilities of HoloLens and inspires developers to think about their own creations in new ways.
Fragments & Young Conker will be available with the Microsoft HoloLens Development Edition, and can be downloaded from the Windows Store on the device:
•In Fragments, you become the detective in a high-tech crime thriller. Experience compelling new possibilities for storytelling and gameplay when life-sized characters are aware of your presence, share your real space, and interact with you in mixed reality. Spatial mapping allows holographic clues to be dynamically placed in whichever room you play.

In Young Conker, you guide a playful, pint-sized hero through your world in an ever-changing adventure game that highlights the fun of playing in mixed reality. Levels change and adapt to your environment, so you can play the same level in different rooms for a unique experience every time.

Sebastian Wloch, Asobo Studio’s C.E.O: “Our partnership with Microsoft gave us the opportunity to develop an unparalleled expertise towards holographic entertainment. With the development of our two first games for the Microsoft HoloLens Development Edition, we are breaking through a new era in video gaming. From now on, the players’ world will be at the center of the action and interactions. It’s been an awesome adventure to work hand-in-hand with Microsoft teams, and to take on the challenge of developing new creative processes for a never before seen device.”

Kudo Tsunoda, Corporate Vice President, Windows Experiences, Microsoft Corp.: “Asobo Studio is a creative company, and a world-class game developer. We were thrilled to leverage the company’s expertise across a number of areas, particularly in building games for new platforms. We’re excited to see how Asobo’s work will inspire other developers as they create their own mixed reality experiences for Microsoft HoloLens.”