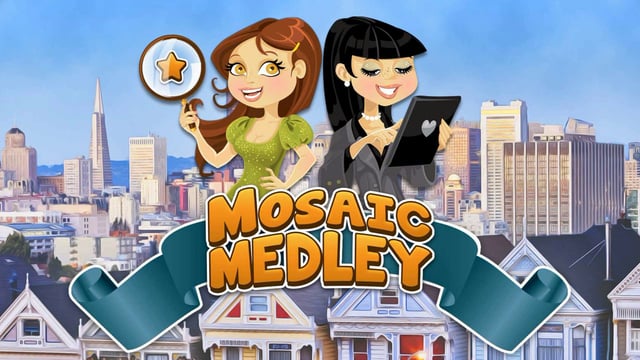 The independent San Francisco games company Plixl has announced the worldwide release of its brand new video game for iPad.

Reminiscent of childhood favorites Waldo, Wally and I Spy, Mosaic Medley is curious, meticulous and delightfully nostalgic. Packed with colourful characters and incredible detail, it sets an addictive challenge for gamers; to find and seek thousands of exquisite things in a medley of mosaics.

The first iPad game title from the Californian husband and wife development team Nathan and Krysta Curtis, Mosaic Medley has already shot to star status in the Apple App Store where it has been chosen as the number 17 top new puzzle game and number 19 top new family game in the US iPad market. It is also picking up a global fan base, ranking number 3 in the New Zealand App store rundown.

A completely new hidden object hunting experience, Mosaic Medley can be played at home, at work or on the go. Made for iPad, the game can be toted around town and used to keep the whole family entertained with cute character Penny and friends, a treasure trove of tasks and a huge range of objects to track down.
Players are challenged to find thousands of hidden items in beautifully designed, fun mosaics, each set to a real theme such as outrageous pets and delectable deserts. Packed with boards to choose from, players learn about fun objects from around the world while they play, making it suitable for even the youngest members of the family to enjoy. There are seven creative tools to help players in their quests and new mosaics added regularly to test the skills of even the most enthusiastic of players.

iPad owners have been downloading the game in their thousands after Mosaic Medley made its industry debut late last year at the San Francisco Good Game Club Event. The first players to experience Mosaic Medley at the public unveiling gave it a unanimous thumbs up, with Jenny saying, “I really like challenging myself with the names of the flowers in the flower mosaic… I want to play over and over again until I get them all right!” Matt added, “”This is so cool! Reminds me of Where’s Waldo!”

The game’s co-developer Krysta Curtis said, “We had so much fun creating Mosaic Medley and are really excited to confirm its worldwide release. The game puts a great and unexpected new twist on the hidden object genre. We wanted to create a casual game that players could pick up and enjoy right away, with a hint of nostalgia to pay homage to the games that kept us entertained as kids!”