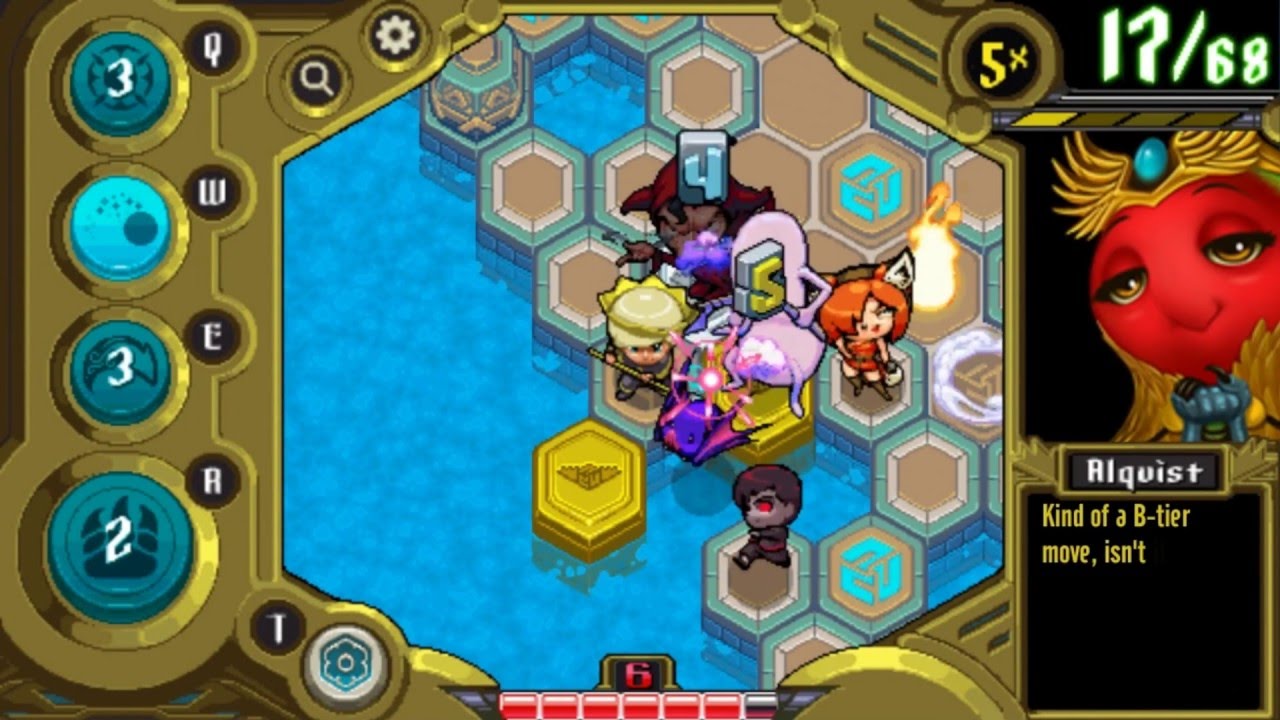 Players guide young Prince Auro through procedurally generated battle arenas in a competition against rival kingdoms known as the “Bumping Games”. Wielding a variety of magical spells, Auro demonstrates his awesome power by skillfully bumping monsters into the water surrounding the arena. Compete with other kingdoms in a unique “single-player competitive” experience.

Auro introduces the idea of a single-player competitive strategy game experience. Players face off against memorable characters to find out who’s the finest monster-bumper in the land. Auro’s gameplay is entirely deterministic – no dice-rolls! Synergize your abilities together to send monsters careening to the watery depths and score huge combos – all illustrated in colorful hand-made pixel art to an original, thematic soundtrack.

At launch, the game will have nine tactical spells which have been carefully balanced so that each match feels fresh. The Bumping Games get harder and harder the more you win, unleashing new challenges and unlocking new monsters. Those challenges prompt players to come up with creative answers, combining spells in never-before-seen ways, with dramatic, often hilarious outcomes.

“After a six year-long journey in production, we’re excited to launch Auro on Steam.” said Keith Burgun, Lead Designer at Dinofarm Games. “We’ve blended gameplay elements from several genres to deliver an experience that we believe players will find refreshing.”

“You’re rewarded for being clever, creative, and aggressive, and thanks to the scaling difficulty, there’s always a new challenge around the corner.”
5/5 – Touch Arcade

“…Show it a fraction of the forbearance given to an RPG or a 4X game and you’ll be entranced by a beautifully efficient design that makes the player feel like some arcane trickster genius.”
5/5 – Pocket Tactics

“It means that while on the surface Auro looks like a dungeon crawler, it’s really a cleverly designed puzzle of strategy and tactics.”
9/10 – Pocket Gamer

About This Game
Auro: A Monster Bumping Adventure introduces a new kind of gameplay: Bumping Tactics.

Guide Prince Auro through procedurally generated dungeons in this one-of-a-kind single-player turn based game, with only a handful of tactical spells and your wits to protect you. Face a variety of monsters, each with their own fun abilites, and then when they least expect it, give ’em a healthy bump, straight into the drink!

Auro is easy to learn, difficult to master, and supported furiously by the devs, who’ve taken over six years to polish this critically-acclaimed game and bring it to Steam in its best form yet.

◾ Quickly get to the action – no nonsense!

◾ From Dinofarm Games, the creators of the hit iOS dungeon-crawler 100 Rogues

Auro is critically-accclaimed (91% on Metacritic) and it’s getting better all the time!

The game has been massively overhauled for its Steam version, with new art, a completely redesigned UI, a new map generation algorithm, new rules, changes to monsters and spells, and much more. At Dinofarm Games, our games are our baby, so expect to see frequent updates and new free content.