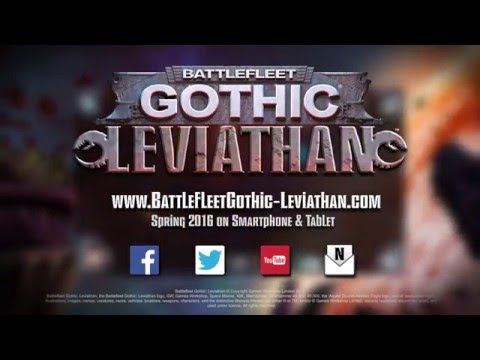 Grand Cauldron and Games Workshop today proudly announce Battlefleet Gothic: Leviathan; the faithful digital rules translation of the eponymously titled tabletop miniatures game set in the Warhammer 40,000 universe. This turn based strategy game, themed on spaceship battles, takes place during the Shield of Baal campaign – where mighty miles long ships battle amongst the stars. The game will be available on iOS (mobile and tablet) in late spring 2016.

Strategy and Warhammer fans alike will have to manage devastating fleets and battle through space in campaign or PVP player mode: In the campaign mode, players will control the powerful Imperial Navy and deadly Space Marines fleets. They’ll have to protect the shieldworlds of the Cryptus system by eradicating the dreadful Tyranids from the map and winning the missions. In PVP mode, gamers can fight with their favourite fleets against their friends or other players. There will be a large selection of ships to choose from – with scores of warships to customize through earned weapons and improvements.

“We’re so excited to be working on this game, being lifelong fans of Games Workshop games, and especially Battlefleet Gothic” said Stéphane Surget, CEO of Grand Cauldron, “we’ve laboured long and hard to make a creative and exciting game – we can’t wait to show it off.”

FEATURES
•Play the faithful tabletop rules translation of the turn based strategy game Battlefleet Gothic from Games Workshop
•Enact immense space battles in the grim darkness of the 41st millennium
•Take command of formidable spaceships from the Imperial Navy, the Blood Angels Space Marines or the Tyranids
•Manage your mighty fleets in the campaign mode to defend the Space Marines homeworld, Baal
•Fight the merciless Tyranids and repel the xenos threat out of the Cryptus system
•Progress with your officer and fleet by earning new skills and ships
•Compete against players from around the world in multiplayer synchronous mode
•Play local multiplayer in the Hot seat mode