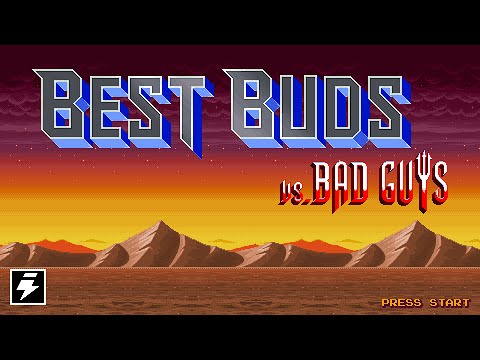 They’ve made it again!  Another milestone has been achieved for the father and son team Richard and Lucas Hill-Whittall.  After a successful Kickstarter campaign in July, Best Buds vs Bad Guys is now finished, released and ready for you to own and play from the Steam store.

Not only have the two of them come up with a multitude of amazing creative and challenging levels, they have managed to get just about more enemies than any other game.  This is quite a feat considering Lucas is only 12, and Richard has been working on Super Icon’s next title, alongside Best Buds.  “We have really enjoyed designing all the enemies and secrets in the game, we look forward to people playing it and telling us what they think” commented Richard.  Lucas also wants to make sure everyone has put Best Buds vs Bad Guys on their Christmas list as it’s the “Best Game Ever!”

Game Features
Beautifully pixelated 16-bit Arcade machine style, with plenty of modern touches including detailed background animation, multi-layered parallax backgrounds, weather and special effects and evolved game design.
Gigantic evil bosses and over 100 varied enemies to fight, many fresh from the imagination of a twelve-year-old boy.
Look out for the many special areas and hidden collectibles.
Since this is a Super Icon game, there are plenty of references to classic games, such as Ghosts ’n Goblins, Green Beret, Bionic Commando, Black Tiger, and loads more!