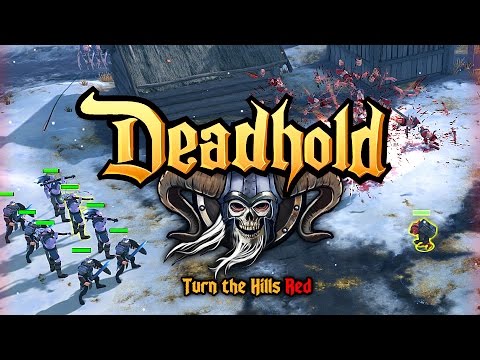 Dark Quarry Games has announced the studio’s first title Deadhold will be launching on Steam Early Access on August 25, 2017 and will be available on PC/Mac for $19.99 USD. Deadhold is a gore infused, fast-action, tactical RTS. With support for up to four co-op players, the gritty dark fantasy world of Deadhold comes to life through its story driven campaign. In multiplayer, Deadhold supports up to eight players in teams or four players in free for all as well as a variety of game modes.

At launch the game will offer the first campaign mission “Unexpected Welcome”, one horde map named “Crucible” where players fight through waves of AI monsters, and one multiplayer map “Killing Time” which supports several game modes like King Of The Hill, Territories, and Deathmatch.

Deadhold’s gameplay is a unique mix of real-time tactics essentials like strategic positioning, unit classes, and physically based simulation similar to such classic games as Myth and Dawn of War 2, combined with the items, loot, and leveling found in action RPGs like Diablo and Path of Exile. The result is a fresh take on the tactical RTS that should delight fans of both ARPG and RTS genres.

A dark force has risen in the west, obliterating any who stand in its wake. The last living races have banded together to change the course of fate, setting Deadhold’s campaign in motion. Told from the perspective of the narrator, you’ll uncover the history of the blight and the truth that lies behind their creation. The campaign challenges you to wield the power of the gods, using tactics and strategy to overcome the onslaught of an overwhelming evil force.

In campaign, the scale of Deadhold’s player choice becomes clear. As a paragon of the Empire, players will choose a deity in which to specialize. Spells are unlocked as players earn experience, allowing them to customize their play style. Players can further customize their builds by slotting relics, runes, and gems, which can drop from defeated enemies. A tier based leveling system adds significant replay value to the campaign missions. As players progress through each tier, new and greater challenges and rewards await them: boss-fights, different enemy patrols and tactics, additional mission objectives, and higher quality items.

Battles in Deadhold are physically modeled. The flight of an arrow is realistically simulated and will embed inside a units head, arms, legs or chest. Unit movement is based on physics, increasing the value of tactical positioning: a line of warriors can block incoming enemies or force them to engage or go around. The explosive bomb wielded by the Sapper can literally dismember units as body parts explode and fly into the air. Injuries and severed limbs stain the ground realistically with blood.

Deadhold™ is a gore infused, fast-action, tactical RTS. Set in a gritty dark fantasy world, players embark on an epic journey to the front lines of war as they uncover the mysteries surrounding an evil blight, and the truth that lies behind their creation.