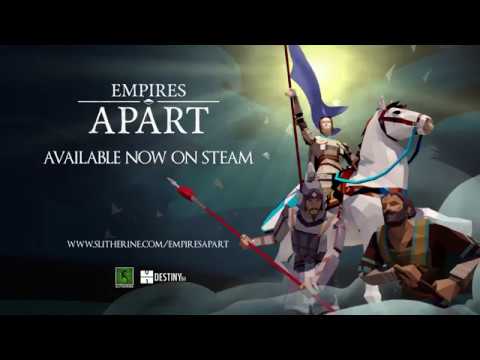 DESTINYBit are huge RTS fans. They grew up playing all-time classics such as Age of Empires and Empire Earth. So when they decided to create a new RTS, they set the bar really high. That was over four years ago.

Empires Apart is out, we can safely say they accomplished the mission of creating a game that’s both heavily influenced by its predecessors, but also integrates a lot of modern features that makes it stand out from the crowd.

The six factions play in a very different way. Each has its own play style, its own heroes and special features. This makes each game a unique experience. Empires Apart gives its best in Multiplayer, so make sure you join online ranked matches to fully appreciate this new gem.

Available for Windows PC on Steam.

You will lead one of six uniquely designed factions in outstanding procedurally generated maps. Each game is a totally different experience as you collect resources, assemble your army and wage war against your enemies.

Play as the Aztecs, Chinese, French, Mongols, Arabs or Byzantines and fight with up to 7 opponents in ranked matches and lobbies. Or chose skirmish mode against the AI to train your skills before you challenge your friends in multiplayer mode. Gather resources during the day and withstand hordes of enemies at night in Survival Mode.

If you are a fan of RTS games, you will relive memories of classic games of the past while enjoying a modern interface and a brand new approach to fast-paced real time gameplay. If you are newer to genre, Empires Apart is the ultimate RTS experience you’ve been waiting for.

Features
– Play as Aztecs, Chinese, French, Mongols, Arabs or Byzantines, each with its own unique gameplay (completely different roster of units and tech tree) and two heroes.

– Online battles and AI Skirmishes with up to 8 players.

– Fight against hordes of AI enemies in Survival Mode.

– Sharpen your skills in 6 unique challenges for each Civilization.