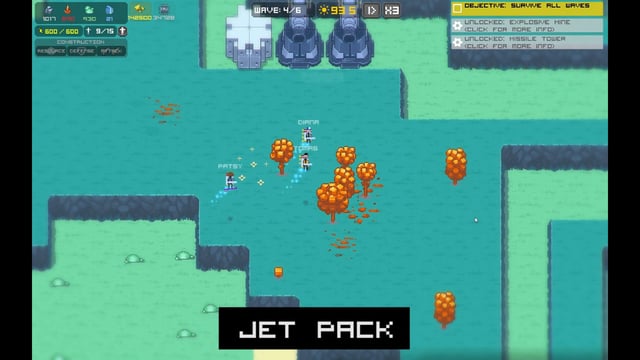 Greetings once again, fleshy life forms! WildFactor is proud to announce its futuristic real time strategy game Freaking Meatbags has defeated Steam Early Access and is now a full-fledged game! To celebrate the milestone, the team is pushing out a massive update that adds tons of new features, including a totally revamped DNA mixing system, a new boss, and new equipments for meatbags to use. The update is so groundbreaking it’s called “Philae”, named after the little robot currently sitting on a comet in outer space.

Freaking Meatbags throws players into a futuristic world where robots have jobs, cephalopods aren’t confined to a single dimension, and humans just stand around talking to themselves. As a lowly cleaning robot, your task is to gather precious materials from each world before the solar system goes kaboom. During the day you scramble to gather resources, build structures and keep your base in good repair. When it gets dark, get ready to fight. Helping you in your daily chores are fleshy, unintelligent life forms known as “humans”. They’re pretty fragile and need your protection, but if you augment them with a brain slug here, some DNA splicing there, they might turn out to be useful!

New features:
– Revamped DNA system with hundreds of alien/human combinations.
– Seven new genes to get all splice-happy with.
– Equip meatbags with jetpacks, hoverboards and… ROCKET LAUNCHERS!
– Stick humans in towers to power-up the buildings. Because of science.
– Overclocking ability lets you see the world in slow-mo.
– Brand new boss that jumps around a lot. Shhh, that’s all we can say!
– Hidden zombie planet. Go ahead, try to find it.
– Over 50 gameplay, sound and interface improvements.
– An extra bullet point item, for FREE!

Take a look at the new video, featuring lots of new things that go boom:

“charming visuals and a cute hook make Freaking Meatbags an easy recommendation whenever it does hit virtual shelves.”
Destructoid

“It was definitively worth the wait !”
Chris – Volunteer Playtester about Philae update