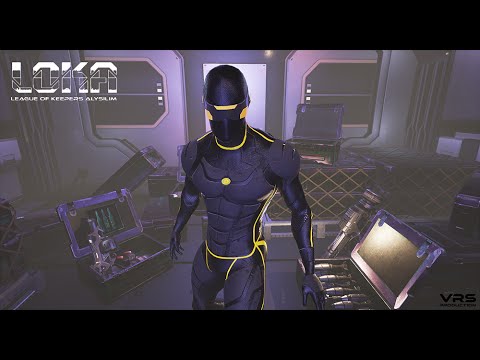 Indie studio VRS Production is proud to announce today that their upcoming shooter LEAGUE OF KEEPERS ALLYSIUM , also known as LOKA, will be arriving on Steam Early Access on July 20th.

LEAGUE OF KEEPERS ALLYSIUM, an exciting new MMO RPG Shooter takes players to a devastated distant future where Allysium, an artificial intelligence created by mankind to overcome illness and death, has taken over the world, leading humanity into chaos and war.

Players will take on the mantle of a freedom-fighter – a ‘Keeper’, experimenting with technological upgrades to the human body and mind – with extensive customisation options for every player. Once ready, and armed at first with only basic weapons and ammunition – battle commences. Only after each victory will players be able to upgrade and redesign their arsenal. They will also have to get to grips with fixing broken technology mid-battle, as bullets fly during intense combat. As gamers progress, skills will increase along with the technology available, until they become leader of their own League of Keepers.

Fans can join the League to engage in the biggest fights, creating a battle team of at least five players, and leading them to triumphant victory. As they progress, they will need to learn to work together, not just in individual teams but with other online groups, as alliances become crucial to victory. Gamers can assign unique positions to create a more challenging and exciting battle for everyone, with battles featuring up to 120 players in an open world field of war. Players can even bet real money on the outcome of each fight, and take part in an international online tournament to win cash prizes.

To celebrate the arrival of the game on Steam Early Access, VRS Production have revealed the game’s first cash prize tournament, which will take place as the game launches on Early Access on July 20th. The tournament will last 14 days and each participant will be allocated 60 hours of playing time to earn as many points as possible. Throughout the tournament the main page of the lobby will display the top players in the tournament, with real-time rankings.

In order to earn points, players can use Quick Game Modes or engage in Leagues after creating one or joining someone else’s league, with 8 players being the minimum number of league participants. Players will also be able to earn points by extracting important research items.

As the game develops, further planned improvements include VR capability, versions for Mac and Linux, as well as more maps and upgrades to be earned. So to get in early. Log onto Steam on 20th July and begin your own journey to become leader of the league! The battle and prize fund are there to be won… Good luck!