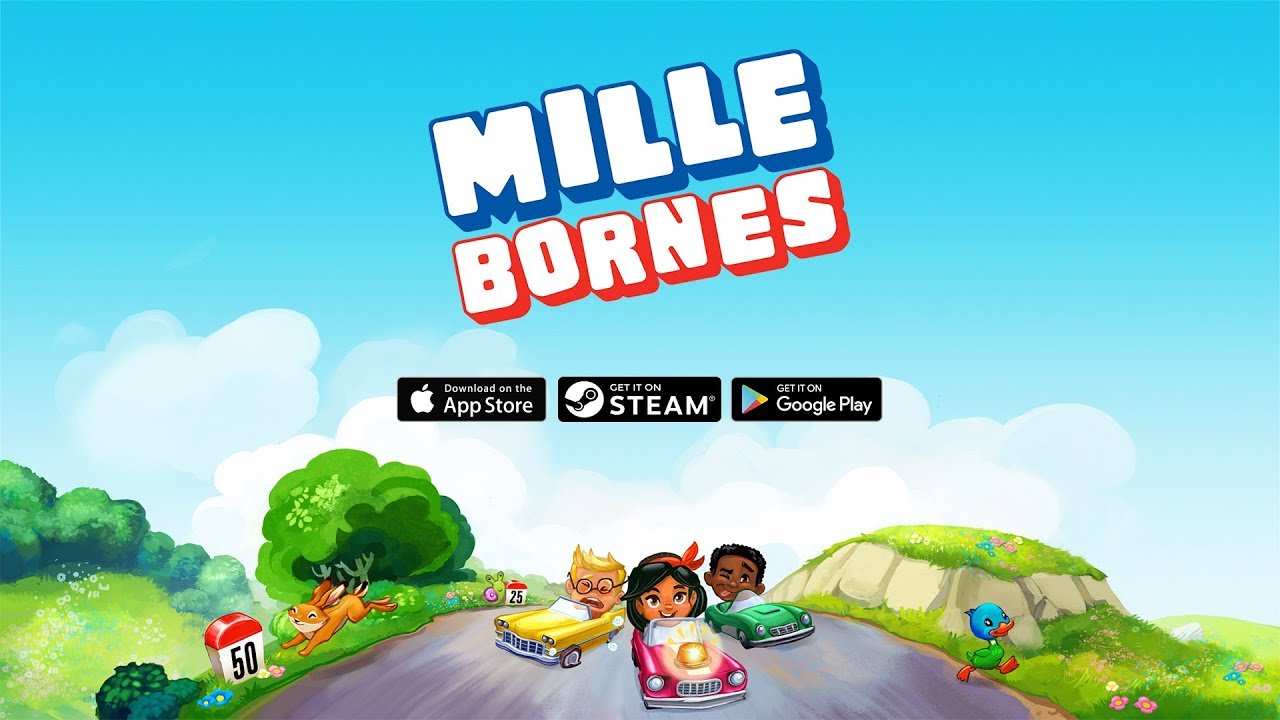 Asmodee Digital and DUJARDIN announced the release of the new digital version of Mille Bornes on iOS, Android and Steam. Young and old alike can get involved, alone or in a family group, with the digital version of this legendary board game first played in French homes back in 1954! Expect crazy racing, foul play, getaways and more in this classic racing game.

A new interactive experience
Like the board game, the goal of the digital version is to reach 1,000 miles to win. Players must use their Distance cards to advance, lay their Hazard cards to prevent their opponents from advancing, and ward off dirty tricks from other players to advance as fast as possible. In addition to cards from the physical deck, the digital interpretation has been enriched with new courses like “In the countryside” and exclusive cards incorporating alternative rules to spice up the action. Events squares allow players to double the distance travelled or slow the player down.

Travel the roads, alone or with others
Players can challenge up to three friends in the race through a turn-based mode or simply improve their driving performance by facing the AI. This mode offers different levels of difficulty for an added challenge.
Two new maps expand the original gameplay, with new landscapes and exciting surprises as players take on “In the countryside” and “Desert.”

Young and old will love to play
Intended for a younger audience, Mille Bornes is easy to play and attractive for children. The colorful graphics and fun nature of the game will allow them to identify with the different characters and each speed card is represented by a different animal. The game is designed to offer pick-up-and-play gameplay, without having to read too many instructions. The digital version also incorporates more than 20 achievements: the more the player plays, the more he gains in expertise!

Corinne Derudder, General Manager of TF1 Games, welcomes this relaunch: “After first releasing six years ago in 2011, we have made the choice to rework the game in detail to provide an enriched gaming experience. Utilizing its expertise, Asmodee Digital has helped create this new digital version, that exceeds our expectations. Parents will enjoy recognizing the familiar elements of the game, and exploring the roads of Mille Bornes with their children.”
Philippe Dao, Chief Marketing Officer of Asmodee Digital, added: “The integration of a game as iconic and timeless as Mille Bornes in the Asmodee catalogue is an opportunity to show the breadth of Asmodee Digital’s expertise.”

The story of the Mille Bornes game
Inspired by Touring – an American game created in 1906, Mille Bornes was created in 1954 by Edmond Dujardin, a publisher of equipment for driving schools and illustrated by graphic designer Joseph Le Callennec. Made in France, Mille Bornes celebrates its 63rd birthday at the end of 2017. The game is a commercial success that has been exported all over the world, having sold in excess of several million copies!

Since 1985, the game has been adapted digitally. Riding on the historical successes of the game, DUJARDIN first published the digital version in 2011 on iOS and Android, in a version faithful to the physical game.