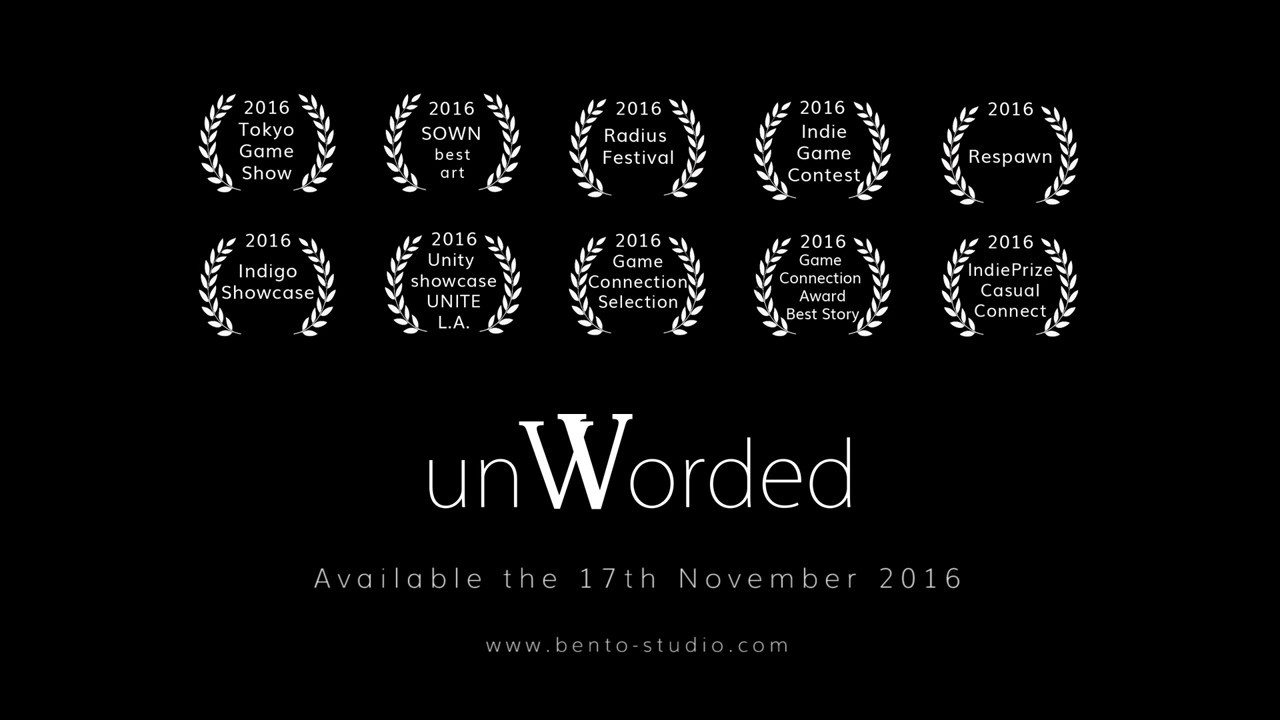 Created by two passionate individuals, Benoit Prunneaux and Séverin Labit of Bento-Studio, who were brought together by their love for creative and original games, unWorded is available now for iOS devices. Benoit breathes life into games with his visual and musical artistry and Séverin is a master of programming. unWorded has won many indie game awards and received high praise; its release has been long-awaited – it’s time to experience all that this masterpiece has to offer!

unWorded is a narrative puzzle that flows seamlessly from chapter to chapter with its minimal yet visually-striking style. It consists of poetic clues and necessitates introspection and critical thinking. The game revolves around the story of a writer who is hospitalized after a serious accident. You embody the existential writer and journey through his subconscious world made of letters and literary punctuations. Your wife is at your bedside reading your stories out loud to you. While you listen to her, you reflect about your life and try to reassemble your memories to create visual objects by piecing letters together and, ultimately, piecing your life and thoughts back together in the process. unWorded is a unique masterpiece in that it is intimate, emotionally-engaging, and appeals to the inner workings of the complex human mind. The genius lies in its subtlety – portrayed by its minimalistic style and simplistic gameplay.

unWorded is a beautifully-made poetic puzzle that calls for intuition and is based on a single manipulation: the assembling of letters and punctuation to create and use objects. Each object triggers an important memory of the writer, creating a cascading effect until his journey is complete. The object is hinted in the poems preceding its creation and a system of hints and skips is offered in case a player is stuck and would like to finish a specific chapter at a later time. The narrative has five chapters for a total lifetime of two to four hours with not a dull moment in play. Best of all – players can pause and go back to the game at any moment with no rush. This mobile work of art is seriously not to be missed.

“unWorded is born from a profound love for typography,” said Bento-Studio game designers Benoit and Séverin. “Letters not only convey meaning but can also bring a strong sense of space. So we ask ourselves, can we build an entire world with just letters? How it would look like? What feeling will we get, if we were to immerse ourselves in it?! With that came along the desire to dive into a writer head, to see what does a thought look like, and how memories form themselves to bubble up to the conscious mind.”