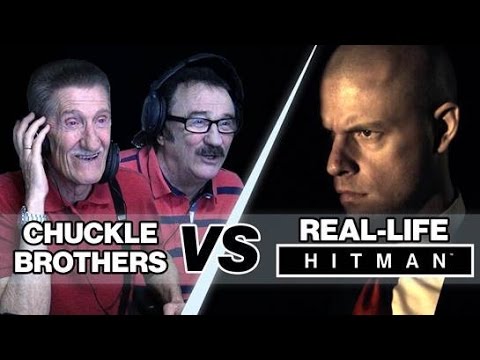 Io-Interactive and Realm Pictures recently invited a select group of people to become Agent 47’s handler as he goes on a mission to eliminate a Serbian arms dealer in a real life Hitman experience unlike anything created before. We picked two of the most dangerous men in the UK to take part: Paul and Barry Chuckle.

In order to be as close to the fantasy as possible, the crew setup a bespoke handler room outfitted with CCTV feeds, a briefcase containing the mission briefing and a phone that would come in handy numerous times during the mission. The Chuckle Brothers had access to a computer used for hacking key elements in the real world environment built by Realm Pictures as well as a direct line to Agent 47 himself. To further add to the experience, Io-Interactive sent Agent 47 voice actor David Bateson to lend his talents to the experience.

“The objective was to try and see if it was possible to create the feeling of a real life Hitman game experience for the participants,” said Marc Skouborg, Brand Marketing Director at Io-Interactive. “Realm Pictures went above and beyond in their efforts and we’ve been completely blown away by the detail and how well they managed to capture the essence of the game, which is all about freedom of approach. It’s simply fantastic.”

A mansion in Devon served as the backdrop for the events in the experience and Realm Pictures worked tirelessly to come up with multiple entry points to the mansion as well as a broad range of different ways for the participants to take out the target – among these were a mobile gun turret, poison opportunities and even the chance to crush the target under a falling statue.

You can go behind the scenes with Realm Pictures here to learn much more about the elaborate setup required to pull this off.