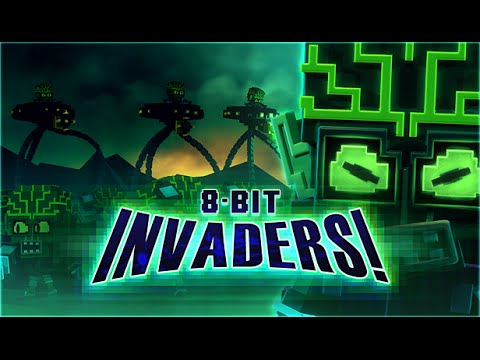 Indie game developer and publisher Petroglyph is proud to announce Friday, December 16th as the official worldwide release date of 8-Bit Invaders, their fast-paced, friendly and accessible Real-Time Strategy game launching on PC via STEAM™, GOG and the Humble Store. Produced by the same veteran team whose previous credentials include Star Wars: Empire At War, Universe At War: Earth Assault and more recently Grey Goo, 8-Bit Invaders offers a feature-rich gameplay experience loaded with content and is a follow-up to the and highly player-rated 8-Bit Armies and 8-Bit Hordes games.

8-Bit Invaders is a tribute to classic RTS games and is suitable for existing fans and new players of the genre seeking a friendly approach to strategy gaming. With a colorful, blocky voxel art style, the game is accessible to anyone regardless of experience. Players will collect resources, build up and defend their bases, amass armies of Alien or Galactic Marine units, and ultimately crush their opponents! Packed full of features, the game at launch includes 2 factions, 24 single-player missions, 10 two-player cooperative missions, 10 AI skirmish maps, and up to 8-Player battles online.

A new, strategic Multiverse Mode lets players compete against AI on a larger scale across multiple locales while managing tech, economy, and their grouped armies.  The game is also cross-compatible with its two predecessors allowing players from all three 8-Bit titles to play cooperatively or competitively, using any of the 6 factions on dozens of official maps or player-made maps created with the supplied map editor.

With multiple difficulty levels, inspiring gameplay and beautifully-rendered voxel-themed visuals, 8-Bit Invaders excels at bringing a complex game genre to the masses with its casual approach to the compelling world of RTS.

8-Bit Invaders will be released on Friday, December 16th, for $19.95 USD (or equivalent in other territories) on Steam, GOG, and Humble Store!  A 25% launch discount will be available for a limited time.