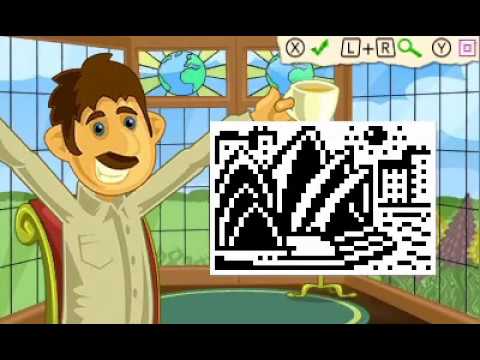 The game’s narrator, Phil, invites players to assist him in developing hotographs taken on his travel adventures. His not-so-instant camera has captured pictures in the form of logic puzzles!

The game is a follow-up to Lightwood’s Pic-a-Pix Colour, a picross or nonogram game released earlier this year, but introduces a brand new style – and scale – of picture puzzle to Nintendo 3DS users.

Although Fill-a-Pix puzzles are only available in black and white, they have the advantage of not being limited to the size of the screen. Much like Lightwood’s “Epic Word Search” games, you need to scroll around to solve all the sections of a much larger puzzle.

Often described as a mix of minesweeper and picross, Fill-a-Pix has only one rule. Each clue number shows how many squares in a block of nine – the clue itself, plus the eight squares around it – should be filled in black.

In Phil’s Epic Fill-a-Pix Adventure, players will solve puzzles to produce stunning pixel-art photos from around the world, ranging from small introductory pictures to massive landscapes with more than 6,000 pixels to fill in!

A full interactive tutorial is also included to make sure players understand all the techniques needed to get stuck in.

Puzzles are designed by Conceptis Ltd, the world’s leading supplier of logic puzzles. They are carefully hand-crafted and guaranteed to be uniquely solvable.