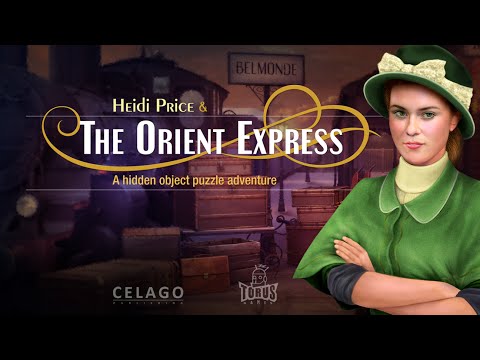 Murder is afoot on The Orient Express! The victim, Anna Clairemont, daughter of a wealthy merchant lies dead aboard the world’s most famous locomotive, and only you can uncover the perpetrator. Who could have performed such a terrible crime? Perhaps it was the Stationmaster – infuriated by the victim flaunting her wealth, or maybe it was the Chef who served her final meal? Trust no one and suspect everyone in this gripping, story-driven adventure is available on iOS and Android.

In The Orient Express, players take on the role of investigative reporter Heidi Price. What begins as nothing more than a story for The Globe newspaper soon sees Heidi trade in her notepad for a magnifying glass and venturing across 17 locations in search of the murderer.

The mystery unravels through 5 gameplay types as Heidi traverses the luxurious Orient Express, carriage by carriage. Classic hidden object gameplay requires players to find up to 8 items in a given level. Spot the Difference ask players to tell the difference between two seemingly identical scenes and Hidden Collection Challenges players to find multiple quantities of the same item.

Shaking up the traditional hidden object formula, The Orient Express also introduces code-breaking and puzzle-solving. This includes repairing torn pictures and documents to progress the story as well as cracking locks and safes holding valuable evidence that will bring players ever closer to the truth. By piecing together the clues and solving The Orient Express’s many riddles, players can interrogate its colourful cast of characters and finally discover the murderer lurking in their midst.