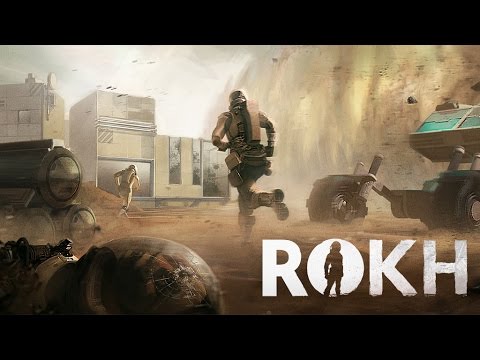 Production company Darewise Entertainment and independent videogame developer Nvizzio Creations, announced today the launch of a Kickstarter campaign for ROKH, a multiplayer persistent survival sandbox game on MARS, where players are challenged to overcome the red planet hostile environment by working together to manage their resources to fight against extreme weather conditions, an unbreathable atmosphere and intense radiation.

Developed for the PC platform, the game is scheduled for release on Steam early access in September and designed for a complete immersion into a cold and dry land harboring a wealth of resources that pioneering colonists can extract and exploit. The ambitious exploration of the 150 square miles’ map based on data collected by NASA, offers breathtaking vistas setting the stage for settlers to aim for self-sufficiency and develop their own life support systems and economy.

“Darewise Entertainment is dedicated to deliver an innovative and original futuristic sandbox survival experience using the expertise of a team composed of industry veterans with AAA expertise. Says Benjamin Charbit, CEO of Darewise Entertainment. With the help of Nvizzio Creations, we have built a best-in class development team and the Kickstarter campaign will reinforce our commitment to the gaming community all the way to the release of Rokh in September”.

Darewise are seeking an initial target of $117,000 (€100,000) to add to its own investment in order to complete the development of ROKH. In exchange for pledging to the project, backers can gain access to a variety of rewards including a digital copy of the game, a digital art book and original soundtrack and many community exclusive items for as little as $12 (€10).

Rokh is a futuristic survival game, deeply rooted in scientific and realistic anticipation, where players will have to work together to overcome the numerous menaces they will have to face on planet Mars. It is a persistent multiplayer game where everything proceeds from simulation and systems interaction instead of classic script-based interaction.

As a newcomer on ROKH, you must find ways to survive by exploring Mars in your basic astronaut suit, looking for resources. Oxygen, food, water, life will have to be cautiously manage but crafting items will allow you to spend more time out there and protect yourself. Build your base alone or with your crew to get better chance of living the big life on this hostile planet. Trade with other players and do your best to maintain peace, you would not want to fight with you fellows on such a hostile environment…

Explore Mars, a beautiful hostile planet and make it your home. From the majestic dunes to the frightening deep valley, you will visit memorable location to find your live saving resources. Don’t stay out too long, Mars can be even more deadly than a riffle gun should you get lost in a sandstorm or stuck out in a frozen night.

PERSISTENT SURVIVAL OF THE FITTEST… OR SMARTEST

Make sure that each and every of your moves serve one goal: survive! You will be in need of oxygen, food, water and you will have to protect yourself from heat, cold, radiation, wounds and so on. Mars will be offering you some resources but you will have to be smart and creative to access to the rest. And remember, there’s no pause in the game. Don’t leave your computer too long, things can happen…

Suits, robots, devices, weapons are craftable and customizable to your taste but first and foremost to your needs. Build smart shelter base by making sure your pipe system can welcome future add-ons. Some crafted devices can be socketed in your walls to give some extra capabilities to your base: automated or programmed tasks, heavier defense powers, survivability comfort or more…

FRIENDS OR FOES, PLAY WITH OTHERS

Join forces with your friends to mutualize the efforts and resources you put into surviving. Trade with other friendly crew to continue develop your own ecosystem. But some will be more onto domination. They will use every system available to loot your resources and base, from direct armed attack to a sneakier hacking program.