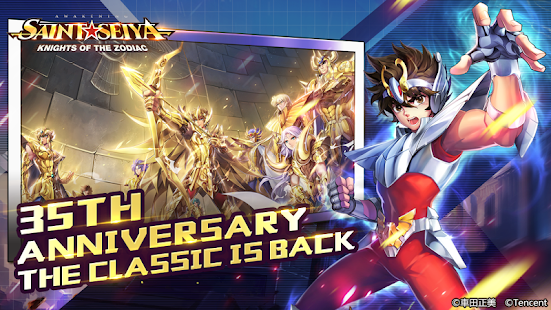 YOOZOO Games is publishing the forthcoming mobile RPG Saint Seiya Awakening: Knights of the Zodiac alongside developer Tencent and the renowned Japanese manga artist and writer Masami Kurumada. As a writer and illustrator famous for his work on fighting manga; Saint Seiya is one of Masami Kurumada’s most loved manga series.

Saint Seiya Awakening: Knights of the Zodiac is an action-packed, visually immersive game featuring stunning 3D graphics. Fans of the original series will remember the mystical warriors known as Saints – sworn to defend Athena in her battle against other Olympian gods who want to dominate Earth. Playing as one of the Saints, and along the lines of the original comics, players must fight in combat to progress through the game. The games’ art style perfectly reflects Kurumada’s classic style, with the characters, scenes and fighting skills all reflections of the original comics. There are also hundreds of fighters to choose from, giving players the choice to customize their team and strategy. The game is blessed with some of Japan’s finest character voice-artists, including Jun Fukuyama (voice of Lelouch in Code Geass) and Yuki Kaji (Eren Yeager in Attack on Titan), completing a package devoted to doing justice to the original.

Pre-register now for Saint Seiya Awakening: Knights of the Zodiac on Google Play or  iOS