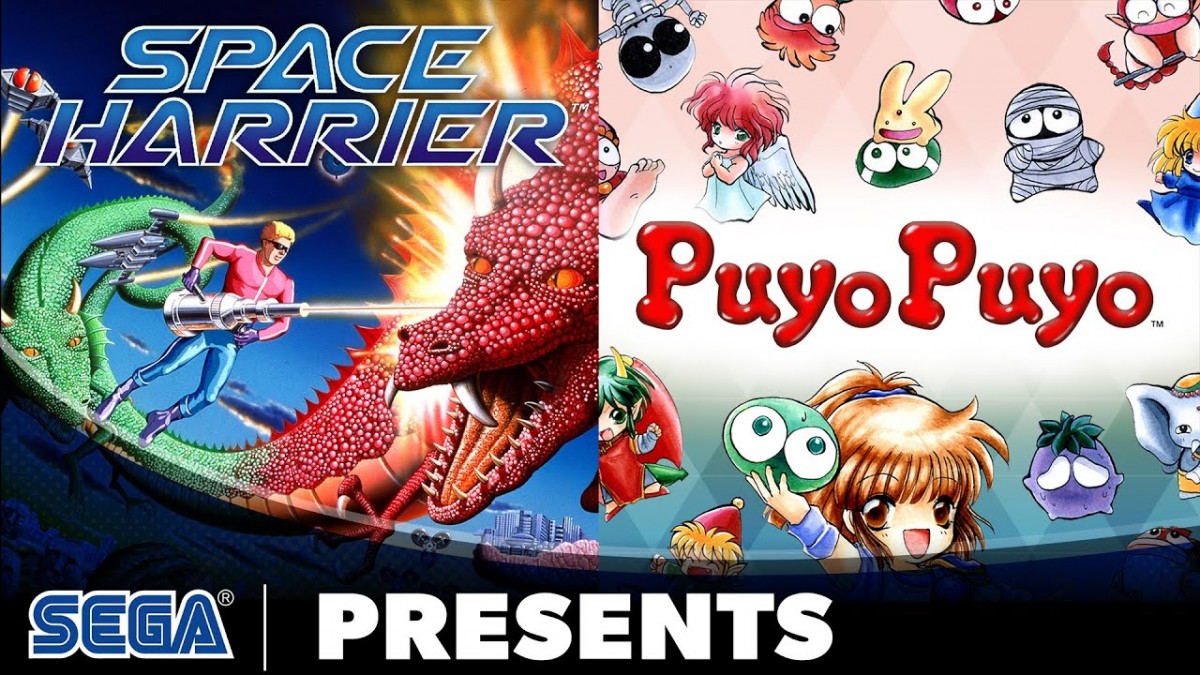 Space Harrier and Puyo Puyo are available as part of the SEGA AGES line-up for the Nintendo Switch.  Take a trip into the Fantasy Zone in Space Harrier, this latest release takes everything fans know and love from the original and delivers a high-intensity experience for the Switch.

Not to be outdone, the highly successful arcade version of Puyo Puyo arrives for Nintendo’s console with a wealth of features that takes this exciting puzzle title to the next level. Whether you’re facing off against an opponent in the Arcade Mode or taking on all challengers online, the SEGA AGES release of Puyo Puyo is a real joy to play whether at home or on the go.
About Space Harrier
In this third-person rail shooter with pseudo-3D graphics, you control Space Harrier, a young warrior battling to save the peaceful Land of the Dragons from vicious creatures. With the help of the dragons and your superhuman abilities, it is up to you to blast your way through a variety of treacherous landscapes in order to defeat these beasts and save the day!
About Puyo Puyo
Based on the original arcade release, you’ll need to keep your reflexes razor sharp in this simple but highly engaging action puzzle game. Your objective is to create combos with four or more “Puyos” of the same color, all the while preventing these colorful blobs from reaching the top of your playfield. It’s a battle of skill and endurance in this entertaining game filled with charming characters!
Space Harrier and Puyo Puyo are available individually on the Nintendo Switch eShop in the Americas and Europe.
About SEGA AGES
SEGA AGES is a series of classic SEGA titles being released on the Nintendo Switch™. Developed by M2, the Japanese developer known for high-quality ports of classic games such as the popular SEGA 3D Classics series on the Nintendo 3DS™, SEGA AGES aims to bring prominent titles from SEGA’s legacy catalog to fans around the world. From a selection of home console classics to a multitude of perfectly-emulated arcade games, SEGA AGES gives fans the ability to build their own unique retro SEGA collection.

SEGA AGES originally debuted as SEGA Ages Vol. 1 Shukudai ga Tant-R, a compilation of enhanced arcade ports of Puzzle & Action: Tant-R and Quiz Shukudai wo Wasuremashita, released on the Sega Saturn in 1996 in Japan. Over time, the SEGA Ages series grew to encompass enhanced ports of dozens of games across multiple systems. The series also made an appearance in the West with SEGA Ages: Volume 1, a collection of enhanced ports of Space Harrier, Out Run, and After Burner II, released in 1997 on the Sega Saturn. Now, SEGA AGES is being rebooted on the Nintendo Switch™, delivering the most faithful ports of Sega Master System, Sega Genesis, and arcade games for the current generation. As you would expect from the retro geniuses at M2, these games will stay true to their original forms while incorporating new features that bring a refreshing twist to these classic titles’ gameplay.