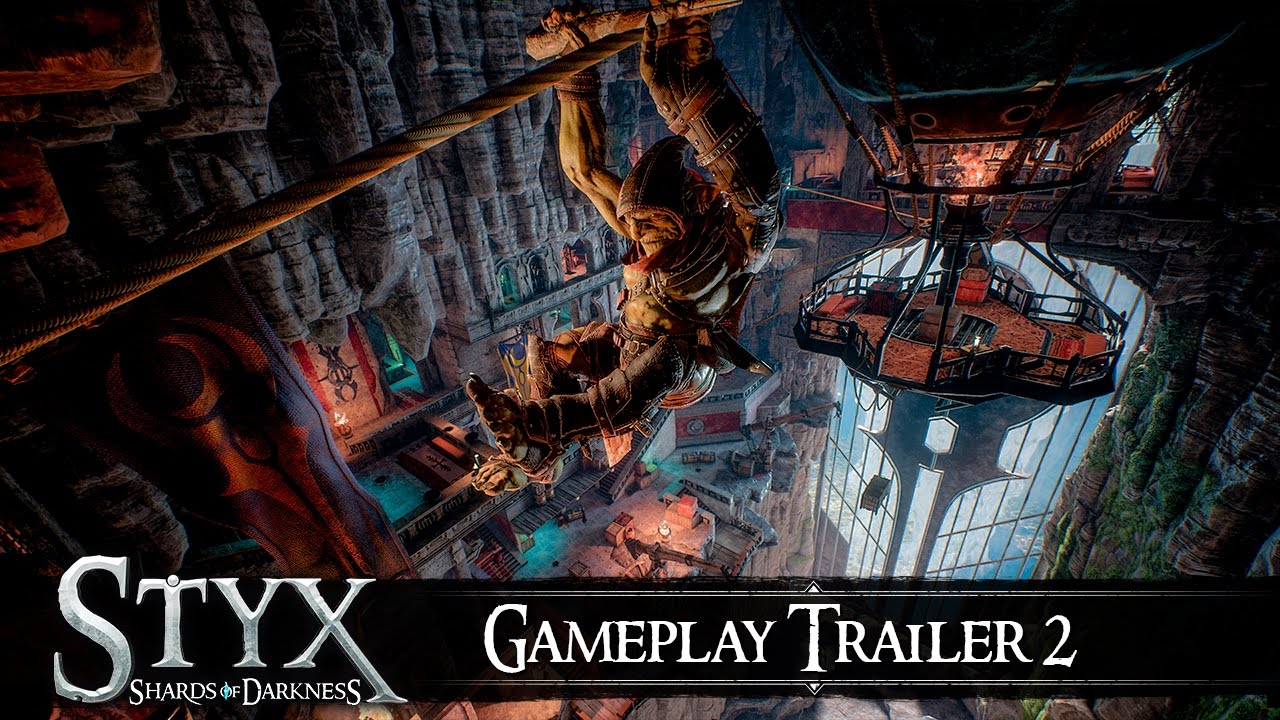 Styx’s second adventure builds upon the foundations laid in the tower of Akenash, with more fluid movement and climbing abilities, a richer story told with cinematics including an enhanced bestiary, side-missions to complete, as well as new and improved sneaking and assassination skills.

The titular goblin’s aerial abilities have been improved and expanded. Swing from ropes and attack from above with a slew of new tools such as the crossbow, with a range of different bolts such as the non-lethal poison bolt. The crossbow can be used not only to kill or disable enemies, but also to detach environmental objects crushing those below.

Cloning is one of Styx’s signature abilities, and they’ve received a major upgrade. One of the new upgradeable abilities is the cocoon, which is a craftable item that you can throw to spawn your clone at a distance. Another new ability is called Rebirth, which teleports Styx to his clone’s location, killing it in the process. It can be used in a number of ways – to travel to spots that are difficult to reach, or to get out of danger when things get dicey.

You will need to use all of Styx’s tools and abilities to get to your goals. If you choose to specialize in crafting, Styx gets access to another craftable contraption, the Acid Trap, which dissolves enemy corpses after they step on them. This is particularly useful against enemies whose armor cannot be penetrated by Styx’s dagger, and enemies whose body is too heavy to carry.

Styx: Shards of Darkness comes out March 2017 on PlayStation 4, Xbox One, and PC! You can preorder the game on STEAM from today 7pm CET / 10am PST to get exclusive access to the Akenash set, donning the outfit and dagger from Styx’s first adventure.

Following its positive reception from press and players, the centuries-old goblin assassin Styx returns in a new stealth game, Styx: Shards of Darkness, with a bigger budget, bigger ideas, and a new engine: Unreal 4. Master of Shadows was a valiant exploration into the world of the green goblin thief, but Shards of Darkness will delve deeper into a complex narrative and fully realized world.

Following the fall of Akenash tower, an extraordinary matter has forced Styx out of hiding to infiltrate Korrangar, the city of the Dark Elves. Supposedly impregnable, a diplomatic summit offers Styx a chance at slipping in unnoticed, as he learns that the event is nothing but a mere façade…

Embark upon a stealthy adventure with new enemies, new environments, and a plethora of new mechanics aimed at refining the abilities and movement of Styx; grappling around corners, climbing ropes, and using his trusty knife as a zip-wire. Shards of Darkness aims to offer unparalleled freedom of movement, along with refined stealth and assassination mechanics, expanding and improving on the strengths of Styx: Master of Shadows.

Styx: Shards of Darkness will be available begining of 2017 on PS4, Xbox One and PC.
A brand new adventure in the universe of a centuries-old goblin assassin, taking you to the city of the Dark Elves
New engine: beautiful graphics created in Unreal Engine 4
New enemies, new environments, new abilities and improved stealth mechanics for Styx
Unique co-op mode – join a friend’s game to sneak and stab through missions together