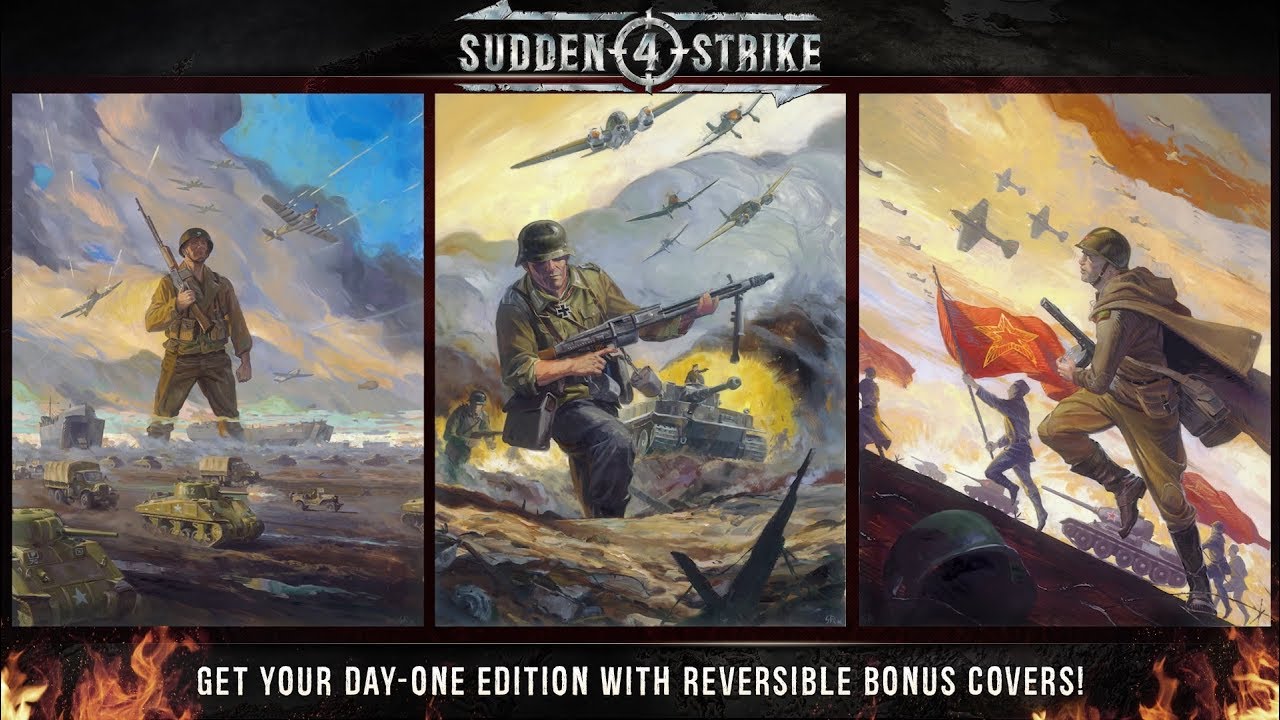 The legendary World War II Real-Time-Strategy series Sudden Strike returns to Windows PC, and premiers for the first time on consoles with a PlayStation®4 release, in just a few weeks! Kalypso Media is excited to show you the awesome bonuses that the physical “Day One Edition” of Sudden Strike 4 will feature at retail!

Acclaimed for his work on Emmy award winning TV show Game of Thrones as well as video games such as Killzone: Shadow Fall and Ryse: Son of Rome, the extremely talented artist, Robert Simon, has collaborated with Kalypso to define Sudden Strike 4’s distinctive art style.

The Sudden Strike 4 Day One Edition for Windows PC includes the ‘Battle of Kursk’ Skirmish map, a digital artbook and a digital soundtrack. These bonuses are also available digitally via Steam for Windows PC, Linux and Mac. Additionally, there is currently a 15% pre-order discount available on Steam that includes immediate access to both the beta test version of Sudden Strike 4 and the original Sudden Strike Trilogy. Steam customers can also download the free Sudden Strike Quiz app on iOS and Android devices to unlock further stackable pre-order discounts for a potential total of up to 25% off.

The PlayStation®4 version of Sudden Strike 4 is available as a Day One Edition complete with digital artbook and digital soundtrack. In UK and export territories (excluding North America, Latin America and Canada), a Limited Edition Steelbook is also available, which includes a bonus documentary DVD, soundtrack CD and double-sided poster, as well as the digital artbook and a slipcase for the stunningly-designed steelbook packaging.

About Sudden Strike 4
Developed as a fully-fledged series entry and not a remake or reboot, Sudden Strike 4 sends you off on three extensive campaigns set amongst the battlefields of World War II. Commanding the British and American, German or Soviet armies, you will lead over 100 different units into battle, including the German Heinkel He111 bomber, the Russian T-34 tank, the British Hawker Typhoon fighter plane and even the notorious German Panzerkampfwagen VI “Tiger”.

In a first for the Sudden Strike series, you can now choose from one of nine individual commanders, such as George Patton or Bernard Montgomery, whose unique military doctrines unlock valuable command and combat abilities for your troops.

Prove your tactical expertise in over 20 demanding single player scenarios, the challenge-focused skirmish mode, and the competitive multiplayer mode. A new reward system awards the player for clever play with skill points and bonus unlockable content.

Sudden Strike 4 offers countless ways to vanquish your opponents. Exploit the weak spots of tanks, set up an ambush, occupy buildings with infantry and snipers, out manoeuvre the enemy with clever positioning or unleash devastating air support – how you approach each mission is up to you!