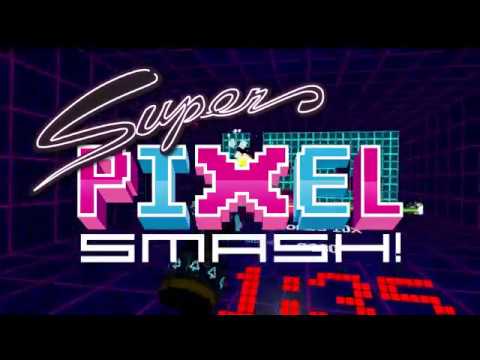 Rank17’s SUPER PIXEL SMASH has arrived on SteamVR! Get ready to destroy walls, trigger power-ups, and earn as many points as possible in this thrilling take on the classics Breakout and Arkanoid.

Enter the fast-paced, neon-induced Super Pixel Smash league — where the Pixel Paddle and Gravity Gauntlet rule supreme. Smash a Digital Energy Orb into a destructible wall and chain combos together to earn a spot on the coveted Super Pixel Smash leaderboards — but be sure to maintain the orb’s momentum if you want to keep your combos alive. You must use the Gravity Gauntlet to retrieve the orb when it slows down … or it’s over.

You can also target special bricks to trigger power-ups:

Meet score goals to unlock additional levels — each with different wall panels and challenges. Accumulate enough points and you’ll be granted access to a special bonus room, where all the walls are destructible — but be sure to avoid the dreaded red bricks and bouncing red balls!

“Playing a game like Breakout in VR has been a childhood dream of mine. With Super Pixel Smash, we go one step further — driving sight and sound further than we could ever imagine in the ‘80s. If you ever wanted to hit an energy sphere while fully immersed in a pixel-based world, this is it!”

KEY FEATURES
*   Enjoy fast-paced, arcade-style gameplay.
*   Marvel at responsive and simple controls.
*   Earn gnarly power-ups.
*   Smash your way to the top of the leaderboards.
*   Travel back in time in VR with rad ’80s-style visuals.

PRICING & AVAILABILITY
Super Pixel Smash is now available on SteamVR for $4.79 — 40% off the $7.99 retail price. The sale will end on the last day of the month (January 31). The game requires an HTC Vive VR headset.