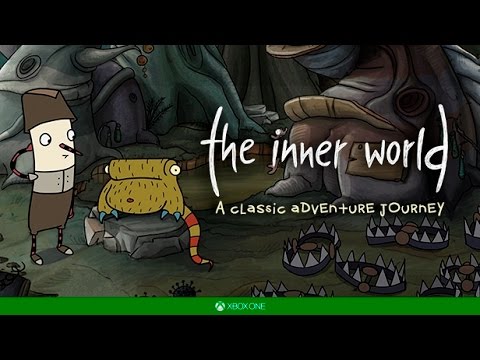 Headup Games and Studio Fizbin proudly announce today’s global release of the critically acclaimed and manifold awarded adventure game The Inner World on Xbox One and PlayStation®4. The game will be available for $14.99/ £ 11.99 / 14,99 € in the PlayStationTMStore as well as the Microsoft Store, with a 10% discount for PlayStationTMPlus members and a 10% release discount for early birds on Xbox One.

The Inner World has been fully localized to English including a great cast of voice actors and also features direct gamepad controls in order to provide the best console gaming experience. Explore the adventures of Robert, Laura and Peck and delight in challenging puzzles, enchanting characters and the beautifully hand-drawn world of Asposia.

If you’re stuck in a puzzle or just seem to be lacking that little final hint to solve some of Asposia’s mysterious riddles, our patented multi-level hint system is there to help you out. It gently pushes you into the right direction, without spoiling too much information.

About The Inner World

Asposia is a mysterious world. Surrounded by the endless soil and against all laws of physics, Asposia is located in an enormous hollow space, which is ventilated solely through three big wind fountains. In this world lives Robert, a naive and cheerful novice of the last wind monastery.

He lives quite an introspective, simple life as a court musician in the shadows of his honored master and ideal Conroy. This changes abruptly, when suddenly one fountain after another runs dry and the Windgods befall peaceful Asposia. Now just Robert is in the center of unexpected events!

Together with the mysterious thief Laura, best intentions and not the slightest clue Robert hits the road to solve the secret behind the disappearance of the winds. During his adventure, he not only meets bizarre Asposians, but also really strange animals. In addition, Robert hast to solve tricky puzzles, which only could exist in Asposia. Is the young adventurer able to save his world? What are Laura’s secrets? And why Robert has such a strange nose?