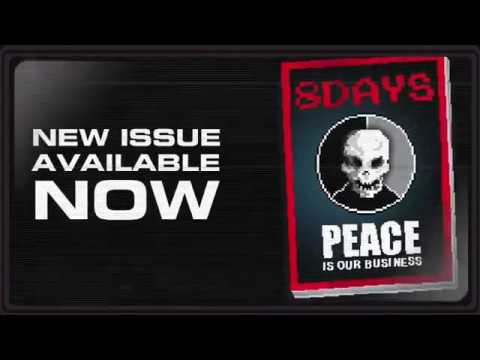 Publisher BadLand Games and Spanish studio Santa Clara Games are getting ready to release the 8-bit top-down shooter 8DAYS on both PlayStation 4 and Xbox One (digital) February 7, 2017.

Do you go in with guns blazing — or do you wait patiently in the shadows? Stand at attention, comrade: There’s going to be enough blood and bullets to start a war!

“We believe that 8DAYS offers an awesome mix of guns, insane bosses and explosions coupled with a great story that will keep players engaged through to the very end.”

G.O.D. Inc. is the world leader in the Private Military Company (PMC) sector — bringing peace to those conflict areas where its clients have strategic interests. In 8DAYS, players take on the role of Lola “Wasp” Cruz and Mike “Ghost” Doe — two of G.O.D.’s expendable mercenaries. G.O.D. and 8DAYS Magazine are modern instruments used to keep the masses under control. G.O.D. is primarily a peacekeeping force, and the 8DAYS Magazine keeps public opinion in line.

In the full game, players will unravel closely guarded secrets while keeping the peace throughout five intense chapters — on their own or with the help of a friend in local co-op.

The PS4 and Xbox One digital SKU will be released on February 7, 2017. The new 8DAYS PC demo is FREE and can be downloaded from the Steam store now.