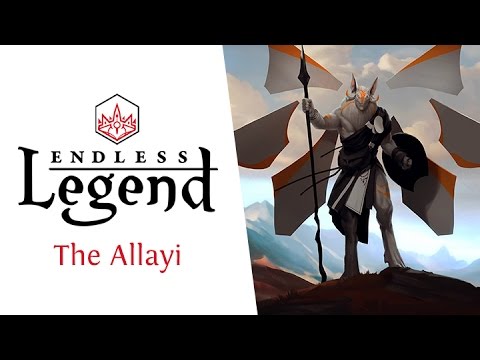 The Endless Legend Shifters expansion introduces a new major faction called The Allayi, a small civilization that has an intrinsic relationship with the new powerful resource the Pearls of Auriga. The Allayi shift with the seasons, from friendly neighbors to enraged thieves, and in the right hands the Allayi can become extraordinary opponents. The Shifters expansion also features an enhanced winter mechanic with the possibility of lakes and seas freezing over.

Factions also have access to the Altar of Auriga, a new building where blessings can be bought instantly by spending Pearls. Blessings are unique and can help players earn defensive towers, special districts and city improvements, pearl stockpiles and pearl item sets.

•New Faction: The Allayi, a small group that have an intrinsic relationship with the new resource, Pearls of Auriga, allowing them the ability to shift with the seasons at will.

•Enhanced Winter: The new season introduces the Pearls of Auriga resource, while seas and lakes can freeze over. Players can collect the pearls on the surface of Auriga and use them to influence the effects of winter, gaining advantages to hinder their enemies.

•The Altar of Auriga: a new building where factions go to spend their pearls and acquire blessings which allow for new buildings, items and stockpiles.

“Plays out on one of the greatest, most beautiful maps in strategy gaming history. It combines style, substance, and setting into a marvelous overall experience for both empire management and tactical combat.”
8.3/10 – IGN

“BEST STRATEGY GAME 2014 – Reinvents the 4X genre, mirroring what XCOM did for tactical turn-based games, and they have, as today Endless Legend brings the genre to new heights.”
9/10 – Hooked Gamers

“COMMENDATION FOR DESIGN 2014 – At every stage Endless Legend shines. Where it takes from the past, it puts its own spin on it. Where it innovates, it does so cautiously and mostly successfully. Amplitude Studios has created another astounding story-driven game, that really has taken the best bits of RTS, RPG and 4X. This is a game that wannabe developers should play and learn from.”
89% – PC Gamer

Create your own Legend
Another sunrise, another day of toil. Food must be grown, industries built, science and magic advanced, and wealth collected. Urgency drives these simple efforts, however, for your planet holds a history of unexplained apocalypse, and the winter you just survived was the worst on record. A fact that has also been true for the previous five.

As you discover the lost secrets of your world and the mysteries of the legends and ruins that exist as much in reality as in rumor, you will come to see that you are not alone. Other peoples also struggle to survive, to grow, and perhaps even to conquer.

You have a city, a loyal populace, and a few troops; your power and magic should be sufficient to keep them alive. But beyond that, nothing is certain… Where will you go, what will you find, and how will you react? Will your trail be one of roses, or of blood?

Explore fantastic lands.
◾Lead one of eight civilizations each with a unique gameplay style and storyline.

◾Survive through cold dark seasons that drive Auriga to its end. Will it also be yours?

◾Experience an endless replayability with randomly generated worlds and quests.

◾Set the size, shape, topography and more… to create your own world to discover.

Expand beyond the unknown.
◾Conquer, build and develop villages into feared fortresses or wonderful cities.

◾Assimilate powerful minor factions and use their special traits and units wisely.

◾Hire, equip and train your heroes to become army leaders or city governors.

◾Raise your civilization by finding mysterious artefacts and forgotten technologies.

Exploit every opportunity.
◾Evolve your civilization through the discovery of new advanced technologies.

◾Collect Dust, luxuries and strategic resources tradable on the marketplace.

◾Keep one step ahead of other civilizations through trade and subtle diplomacy.

◾Choose from different victory conditions and adapt your strategy on the fly.

◾Use unit equipement, abilities and the terrain to overcome your opponents.

◾Zoom out of a battle and rule the other aspects of your empire seamlessly.

◾Define your custom civilizations and confront those created by your friends.