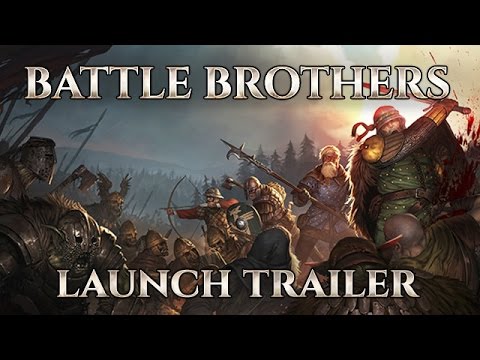 Battle Brothers sends players to an open medieval low-fantasy world in which they are tasked to lead a band of up to twenty mercenaries, each coming with individual skills and properties. With this company of ‘battle brothers’ they explore a dynamically generated worldmap. By taking contracts, hunting for treasures and fighting numerous battles band members improve skills, gain experience points and new abilities. In the complex combat mode the strong AI opponents can only be overcome if players make good use of their mercenaries’ individual strengths and the particular terrain of the battle ground.

Battle Brothers was inspired by groundbreaking strategy classics such as XCOM: Ufo Defense, Jagged Alliance, Warhammer: Shadow Of The Horned Rat or Mount & Blade. “By developing Battle Brothers we first of all have made a game we like to play ourselves. We want to connect with past times when game developers have been passionate gamers, not corporate businessmen”, says Overhype Studios co-founder and managing director Jan Taaks.

Battle Brothers is a turn based strategy RPG mix which has you leading a mercenary company in a gritty, low-power, medieval fantasy world. You decide where to go, whom to hire or to fight, what contracts to take and how to train and equip your men in a procedurally generated open world campaign. Do you have what it takes to lead them through bloody battles and to victory? The game consists of a strategic worldmap and a tactical combat layer. On the worldmap you can freely travel in order to take contracts that earn you good coin, find places worth looting, enemies worth pursuing or towns to resupply and hire men at. This is also where you manage, level up and equip your Battle Brothers. Once you engage a hostile party the game will switch to a tactical map where the actual fighting takes place as detailed turn based combat.