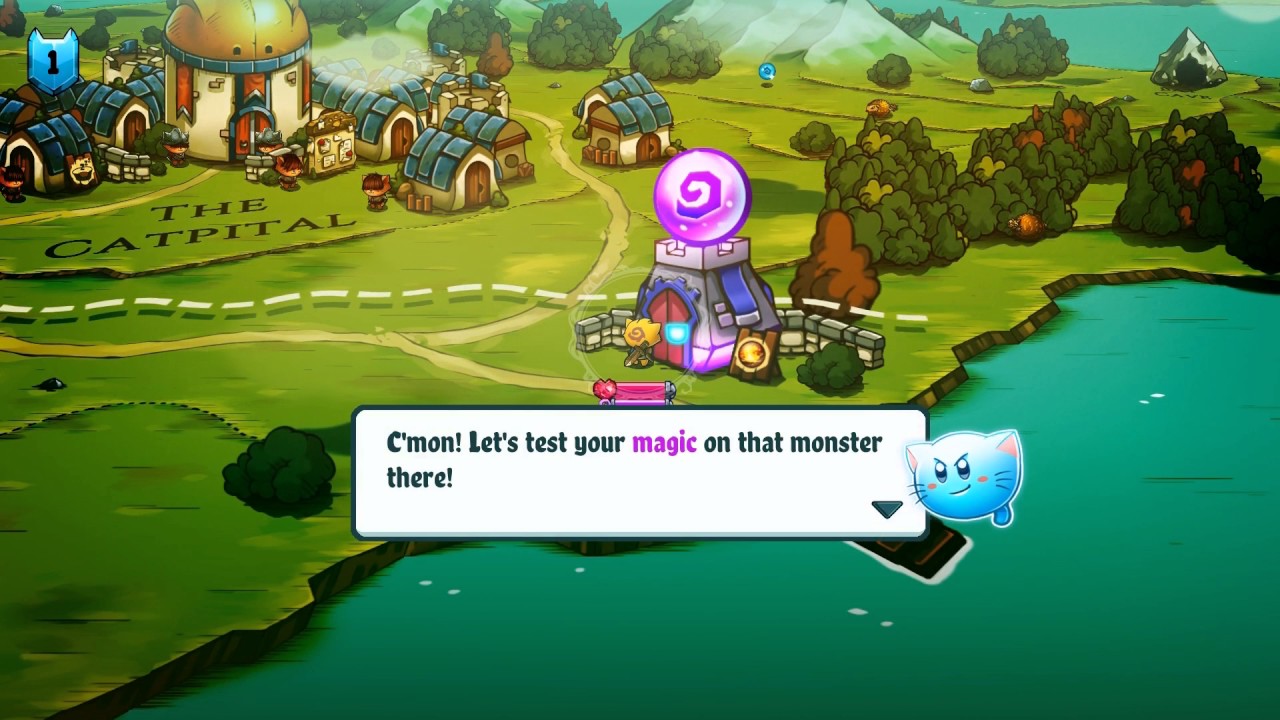 PQube and The Gentlebros will be releasing the ultimate catventure game, Cat Quest for Steam on August 8, 2017 and on PlayStation 4 and Nintendo Switch in Q4, 2017.

Cat Quest is a 2D action-RPG where you will discover an epic tale of destiny and darkness, collect epic loot, learn new spells and engage in frantic catfights. Featuring real-time combat in a vast open-world setting, the kill-loot-level up experience has never been smoother than in Cat Quest.

Let’s take a closer look at the troubled world of Felingard where the story of Cat Quest takes place. Meet Drakoth, your friendly neighborhood cat who… wait a minute, this cat doesn’t look friendly at all!

A leisurely fishing trip with your sister is interrupted by this dastardly evildoer as he snatches her and blows up your boat. Not only is your sister catnapped, your boat in smithereens, and your delicious fish lost to the sea, but you had to have a bath! Surely none has had a day so dire!

Waking up to a world in turmoil, you find yourself with a new pawtner, the guardian spirit, Spirry, and a meowsterious mark on your head. The mark of the Dragonblood, a long-lost race of cat warriors that defeated the dragons ages ago.

Dragons have returned to Felingard, the very same creatures that once extinguished the light of the Old Masters. The mighty beasts now roam the land, spreading chaos and terror everywhere they go. Only one cat can save the world now, he’s hungry, he’s clean behind the ears and he’s pissed!

Explore the world of Felingard and help its citizens restore order in the chaos. Numerous towns dot the vast landscape while the minions of evil lurk in the deep furrests and cold meowtains. Secret retreats, fabled treasures and dangerous dungeons are yours to discover.

Every town is dealing with its own set of issues and the townscats are in desperate need of a hero to stand tall against the approaching darkness. Feed the hungry cats of Fishercat’s Friend, solve the mystery of a strange charm in Bermewda’s Triangle or save the King in the Catpital.

As Drakoth’s influence grows and the world becomes more dangerous by the day, it is up to you to grow stronger, live up to your Dragonblood heritage become the saviour that the world needs.

Develop your skills and change the way you fight through the items you equip. Do you favour the ways of a heavily armoured knight, a nimble assassin or a powerful mage? It’s completely up to you!

As the last Dragonblood, it’s up to you to save the world of Felingard from certain catastrophe in Cat Quest. Prepare for the ultimate catventure!

Cat Quest pounces on to Steam on August 8, 2017 and will be coming to consoles later this year!