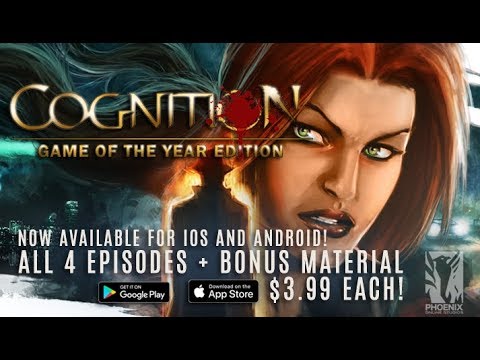 Phoenix Online Studios announced the long-awaited mobile release of their award-winning game, Cognition: An Erica Reed Thriller – Game of the Year Edition for both iOS and Android platforms. Take on the role of Erica Reed, a Boston FBI agent with the power to see visions of the past, as she tracks down four different serial killers and uncover a series of clues left for someone with her specific ability. But who’s leaving the clues? How do they know her secret, and what do they want from her? This edition of the critically-acclaimed adventure features directors’ commentary, behind-the-scenes development diaries, concept sketches, outtakes, and more! All 4 exciting episodes are available for iOS and Android mobile devices.

“Working on Cognition again has been a wonderful and surprisingly satisfying experience for all of us,” said Katie Hallahan, PR Director and one of the designers of the game. “We’ve wanted to finish the mobile release with the Game of the Year version for a long time now, and we couldn’t ask for a better game to kick off 2018 for Phoenix. We’ve got some great releases lined up this year, and having Cognition lead the way is the perfect start!”

Cognition Game of the Year Edition is also available on Steam, GOG.com, Humble, and the Phoenix Online Store.