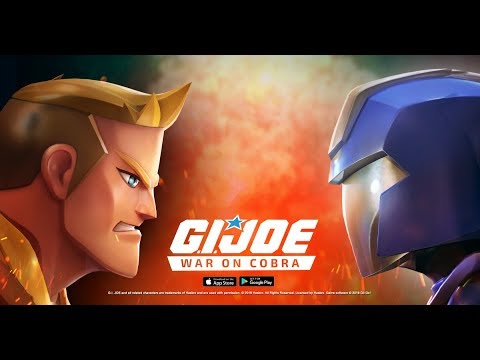 The Cobra revolution has begun. And wherever there is trouble, G.I. JOE is there. G.I. Joe: War on Cobra is available on  iOS and Android devices.

Developed by Emerald City Games – and published by D3 Go! in partnership with HASBRO, Inc., G.I. Joe: War on Cobra brings the world of G.I. JOE to life as never before seen with a massive roster of heroes, villains, vehicles, and troops from the beloved animated series, iconic toy line, and comics. Do you have what it takes to create a strategy to take out foes by land, sea, or air – anytime and anywhere? Download today for your preferred device via the App Store, Google Play, and Amazon Appstore.

In G.I. Joe: War on Cobra, choose a side and fight! The War on Cobra wages on, but where does your allegiance lie? Fight for freedom and save the world from total chaos by joining the Joes. Or show your might in your quest for world domination by joining the forces of Cobra. The fate of the world is at stake. Will you be its savior or conqueror?

G.I. Joe: War on Cobra features many of your fan favorite G.I. Joe Heroes and Cobra Villains including Duke, Scarlett, Roadblock, Snake Eyes, Cobra Commander, Baroness, Destro, Storm Shadow, and look out for even more characters in the coming weeks. Jump right into battle this week in the Silent Strike and the Shadow and Death Event and fight to unlock Snake Eyes or Storm Shadow to add some devastating melee skills to your squad.  Stay tuned for a new event featuring Roadblock and Baroness on January 24!