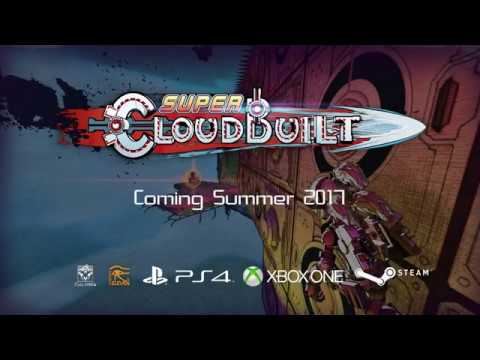 Free-running to console and PC in Summer 2017 – Developer Coilworks and publisher/Developer Double Eleven announced today that Super Cloudbuilt, the frenetic sci-fi parkour platformer, will hit PlayStation® 4, Xbox One, the all-in-one entertainment system from Microsoft and Windows PC this summer.

Originally launched on PC in 2014 as Cloudbuilt, Coilworks and Double Eleven totally remastered the title, reevaluating the game from the base mechanics up. The result stands as a definitive edition, making the experience more intuitive to new players, while adding increased depth and variation, allowing you to choose between taking your time to explore and focusing on blistering speeds and high scores.

Super Cloudbuilt puts you in the role of Demi, a young soldier who wakes up in the empty shell of a ruined building, in the centre of a strange new world, disconnected from her old life and physical body. Confused and isolated, Demi pushes herself physically and mentally to overcome the obstacles of her new reality. Complete incredible feats of free-running and sharp shooting, using Demi’s rocket-powered exo-suit to leap and run through expansive worlds floating above a vast abyss. With each new challenge she overcomes Demi learns more, pushing her to piece together the future now laid out before her. Demi persists, traversing levels, allowing her to experience multiple endings: will Demi learn to understand and accept her new world, or question her reality and learn to defy it?

Featuring lightning-fast, action-packed speedrunning gameplay and bold hand-crafted environments, Super Cloudbuilt appeals to players who value skill, challenge and improvement. Speedrunners will vie for top dog in the rankings and extensive leaderboards, and players can also experience three gameplay modes (Story, Ranked and Rush mode) with a total of 177 challenges between the Time Trial, No Ammo, Fragile, Supercharge, Beacon, and Pathfinder options. Super Cloudbuilt combines all previous DLC levels into the base game and features enhanced graphics, UI and optimised gameplay offering more opportunities for players to experience the game with greater depth and variation.

Super Cloudbuilt is a speedrunner’s dream game come to life, and it’s hitting PC, PS4 and Xbox One this summer.