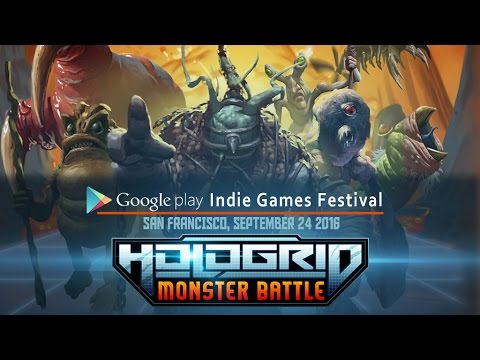 Independent game studio HappyGiant and award-winning visual effects house Tippett Studio today announced that their collaboration  HoloGrid: Battle Monster, a tactical strategy AR game combining elements of board games, collectible card games (CCG) and digital games, has reached beta on its initial mobile platforms. The game, which has received critical acclaim and completed a successful crowdfunding campaign earlier this year, is slated for release on iOS and Android as a premium boxed product early in 2017. Additional next gen AR and VR platforms including but not limited to Microsoft HoloLens and Google’s Tango are also in the works.

Selected as one of thirty games to be showcased,  HoloGrid: Monster Battle will be making its west coast debut at the Google’s inaugural Indie Games Festival on Saturday, September 24 at San Francisco’s Terra Gallery.

Inspired in part by the HoloChess scene, created by  Phil Tippett for  Star Wars: Episode IV – A New Hope and then recreated for last year’s  Star Wars: Episode VII – The Force Awakens,  HoloGrid: Monster Battle brings the monsters of Tippett to life. Captured through a process known as Photogrammetry, where actual hand-crafted 3D models are filmed from all angles and then used to build digital models used in the game, the creatures and game board literally pop off their collectable cards and into the digital game.

“We’d been working on some augmented reality technology for a few other projects and, since we’d long been fans of Phil Tippett’s creations and had be thinking about doing a project together, it occurred to us that the technology was finally here to bring such creatures to life as game characters in a more meaningful way.” Said Michael Levine, president of HappyGiant. “He basically let us ‘shop’ through his monsters, picking those we thought would be most compelling, and then we designed the game (i.e.: character stats and attacks) around them.”

The game play of  HoloGrid: Monster Battle is similar to that of games like  HearthStone or  Magic: The Gathering, but uses physical playing cards to trigger Augmented Reality creatures and a gameboard. Players will be able to play head-to-head, either locally or remotely. Offline play is possible as well.

“It’s an exciting time to be creating games and pushing the boundaries of each genre, as these new mixed reality platforms open up all kinds of new possibilities,” said Levine.