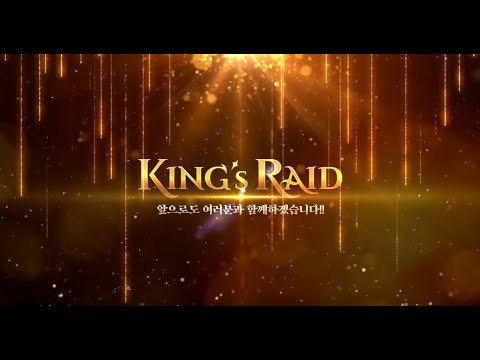 – 1,000 Days of Infographic + Thank You Video Message from Developers

On Nov. 12th, “KING’S RAID” will offer special gifts to all users who have logged on to the game for seven days with in-game events.

In addition to the 7 days of rewards, there will be a 1,000 days celebration dungeon in the center of Orvel. The dungeon will include six different story dungeons and three special dungeons. Players will be able to purchase 3-star hero selector, 1000 Days celebration cosmetics, and many more in-game items with event tokens.

For the 4th wave of updates on Soul Weapons, the chosen heroes for this update includes Neraxis, Chase, Shea, and more. Five new costumes will be available in the shop along with the start of “Guild Conquest” Season 8, and various in-game improvements.

Dreamcatchers are also releasing the main title track of “KING’S RAID” titled “Blind Days.” The song has been created by composer XKA & Neptune. The genre mix between rock and orchestra is getting positive reviews from players and received comments that it portrays the deep story of “KING’S RAID” very well. The song will be featured in the main screen of the game for a limited time.

In celebration of 1,000 days of successful game service, VESPA has created a single image infographic that contains all the previous records of “KING’S RAID” and revealed a video message from the developers thanking the players.

The infographic features a wide range of information, including the world’s most purchased hero, the hero with most wins in PvP, the bestselling costume in the world, and most awakened Unique Weapons and Treasures.

The infographic doesn’t just a list of numbers in the game content. Actual in-game names of players around the world were also revealed to show that players who enjoyed the “KING’S RAID” are the focus in the long journey of 1000 days.

In addition to the 1000 days celebration message, various in-game music and soundtracks were unveiled as well. The first batch consisted of music used for the Soul Weapon and Pandemonium updates, and in-game background music. Game music is available to anyone through a global streaming service called SoundCloud.

Finally, through a video message that featured various developers, art team, and design team, VESPA thanked players who loved the game for a long time and asked them to expect new exciting content to be updated beyond 1,000 days in many different languages including English, French, Vietnamese, and Japanese.