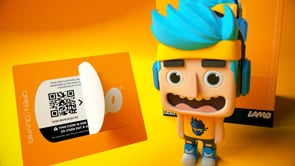 Get ready for the most awesome convergence of the world’s most popular pro gamers, high-quality vinyl collectibles, a unique mobile Augmented Reality (AR) experience, and a fast-paced digital party game, as developer and collectible creator LAMO unveiled the LAMO® product universe that does exactly that! The LAMO experience consists of vinyl collectible figures based on pro gaming royalty — including Ninja, summit1g, TimTheTatman, LIRIK, and Dr. DisRespect — combined with a fully-interactive AR collector app, and a fast-action high-energy battle brawler that takes place in a stylized amusement-park-themed self-destructing game world.

The LAMO universe features premium vinyl collectibles modeled on — and fully licensed by — some of the most popular streamers and competitive gamers. The first five figures are available exclusively at Target and GameStop. (All but Dr. DisRespect will be playable in-game, with many others to be introduced soon.)

Players are encouraged to activate the figures via the LAMO AR app (Android and iOS) for special in-game bonuses — including unique models and skins for the character and their hover-vehicles. Once unlocked, these bonuses become available for use in the LAMO arena brawler as characters in the free-for-all or team battle mayhem. Along with unlocking digital bonuses and serving as a way to track figure collections, the AR app also lets users take their unlocked characters out to explore the real world in an augmented-reality experience.

The LAMO digital game integrates the collectible figures and the unlocked mobile app digital content in a fast-paced eight-player arena brawler. Players choose a streamer as their character and jump into free-for-all or team battles for control of the self-destructing arena. The destructible battlefield is a dynamic amusement park-themed collection of obstacles and power-ups where players collect Jelly, the game’s main resource, to level up, build automated towers, traps, and best of all — unlock the big stompy Mech!

Danger lurks around every corner, not just from other players, but in the form of Cataclysms, which split the earth and create deadly crevasses players need to avoid or launch over them on their vehicles! The LAMO experience has been described as “The Game Between Games” as its entertaining over-the-top eight-player sessions embrace a quick-action party game vibe, with average games lasting around five minutes per session – making it perfect as a quick and stream-friendly diversion between hardcore gaming sessions.

The LAMO vinyl figures and AR app are available now, and the LAMO game will launch into closed Alpha for Windows PC shortly. Console and mobile versions of the LAMO game are also in the works. As a special bonus, by purchasing a LAMO figure and scanning it via the AR app, players can immediately access the limited-time Alpha test and unlock character-specific in-game content – playable avatar with a custom attack, skins, and unique vehicle – equal to or greater in value than the figurine’s purchase price

LAMO® is a universe of physical and digital products that create an amazing new era of the “toys-to-life” experience. At its core, it’s all about bringing people together in an enjoyable collective experience, all while having fun blowing stuff up. ‍ LAMO is made with gamers. And when we say “with gamers” we’re talking the world’s top competitive video-gaming talent. Ninja, summit1g, TimTheTatman, and LIRIK are not only featured as collectible vinyls and interactive characters, but they were directly involved in developing the LAMO experience right from the start. LAMO offers high-quality collectible vinyls combined with mobile AR and fast-action brawler battles to create an awesome bundle of fun!