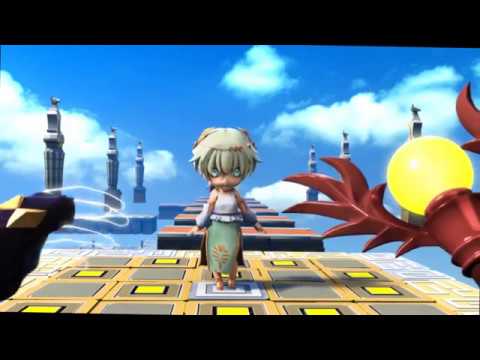 Oasis Games Ltd welcomes players to take possession of celestial powers and a magical light staff and transport themselves to the grand adventure that awaits in LIGHT TRACER. Now available for HTC VIVE™ via Steam® and PlayStation®VR on the PlayStation™Store; players can aid the enchanting princess as she scales the Babel-esque towers, in search of a cure for a cruel disease in this unique puzzle platformer.

The original PlayStation®VR version was well-received, earning accolades from critics including:

Instead of copying the status quo, Light Tracer tries to give gamers something they haven’t already conquered before.
8 out of 10
– PlayStation Lifestyle

The art and graphics are beautiful, slightly stylised and cartoonish in a way that suits the feel and atmosphere of the title perfectly.
4 out of 5
– VRFocus

Beautiful graphics, design, and music that make it a delight to sit and tackle the puzzles for hours.
Positive
– Honey’s Anime

To celebrate the princess’ journey into an even broader virtual world, Oasis Games and Void Dimensions have improved on the magical worlds and the experience that awaits in LIGHT TRACER. Both VIVE and Rift releases have updated with enhanced graphics and optimized visuals, allowing players to be even more immersed in the rocky, snowy, gravity-bending environments and ensuring that all views of the magical worlds are even better from any angle.  Additionally, being godly is made easier as the game’s operating system has been upgraded for a more natural control.

In LIGHT TRACER, players lead a princess to the top of an enigmatic towers to save her ailing people – using godlike powers, and two hands, to wield a Light Staff and manipulate views for better interactions. The game combines platform-style movement and clever puzzles with unique play mechanics and delightful artwork. Players will direct the Princess through action-platform stages using jumping skills, precise timing and strategic attacks using the Princess’s sword to get around enemies.

The Princess’s journey comprises eight varied chapters where she will encounter rock-throwing trolls, a world of snow, slippery ice and new monsters to fight; each ending with a challenging boss battle. Developed by Void Dimensions and published by Oasis Games,