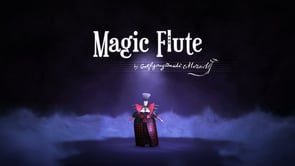 A month has passed since Magic Flute: Puzzle Adventure debut on the App Store. The title that so smoothly connects the world of the Mozart opera with the world of games, immediately won the hearts of both gamers and reviewers. Now the time has come to bring the magic of the opera, beautiful graphics and all the adventures that Tamino is going through, to Android devices. Additionally, to meet gamers expectations, LabLike team decided to prepare a free demo version of the game available only on Google Play.

Those that are still hesitating might be convinced by the fact, that the iOS version of Magic Flute: Puzzle Adventure won by storm the hearts of both gamers and reviewers, as evidenced by the newest TRAILER and some chosen quotes below:

The gameplay video showing what to be expected from this unique title can be viewed HERE (Vimeo) or HERE (You Tube).

Additionally there’s also a demo version of the game available on Google Play, that offers 6 out of 32 levels. This demo version is available completely for free under the link below:
https://play.google.com/store/apps/details?id=net.lablike.magicflute.lite

It offers gamers a chance to get to know the brand new TouchSense® Haptic feature. This technology, implemented also in the full version of Magic Flute: Puzzle Adventure, allows to literally feel quakes that Tamino experiences in the game, while being attacked by a deadly serpent. And that’s thanks to the fact, that this solution makes the phone or tablet vibrate whenever the snake is attacking Tamino.

Magic Flute: Puzzle Adventure came to life as the result of co-operation between the Warsaw-based LabLike studio and Amon Miyamoto, one of the most renowned stage opera directors in the world. Owing to their creative efforts an extraordinary staging of Mozart’s “The Magic Flute” opera took place in Tokyo, in July this year. The opera stage transformed into a computer game world entered by Tamino – the main protagonist of Mozart’s masterpiece.
Inspired by this unique approach, the LabLike team decided to take the idea to another level and turn the opera story and characters into a game. Consequently, a beautiful and extremely entertaining casual puzzle title was created. It won the Third Award in the Very Big Indie Pitch contest during Pocket Gamer Connects in London and was chosen by Gamezebo as the Best In Show game during Casual Connect in San Francisco.
In Magic Flute: Puzzle Adventure you play Tamino – a young, fearless prince whose destiny has led him to the kingdom of the Queen of the Night. Saved by the queen’s three servants witches from a deadly serpent, Tamino promises to save her daughter – the beautiful princes Pamina, from the hands of the evil Sarastro. This is how the prince embarks on a journey of mystery, magic and danger. With the help of the Magic Flute given to him by the three witches, Tamino must prove his loyalty, courage and rectitude to save the princess. But in a world where nothing is as it seems, rescuing Pamina is not only the beginning but the starting point of discovering the real secret of the Queen of the Night kingdom.
Magic Flute: Puzzle Adventure is a puzzle game based on simple, yet powerful ‘slide’ gameplay mechanics. The goal is to build a path and exit the level. To build the path you will need to slide tiles, avoid cracked ones which can collapse, guards that will try to capture you, various blockades and a deadly serpent. Sliding tiles is possible both vertically and horizontally and each level can be finished in multiple ways. Spatial imagination and logical thinking are the only limits.
THE GAME’S MAIN FEATURES
• Third place in the Very Big Indie Pitch contest during Pocket Gamer Connects 2015 in London.
• The Best In Show game during Casual Connect in San Francisco according to Gamezebo.
• A casual puzzle game featuring Mozart’s music and the story of “The Magic Flute” opera.
• Art direction inspired by the Tokyo production and set design, directed by the renowned Amon Miyamoto.
• Full English, Japanese and Polish versions.
• Gameplay enriched by the TouchSense® Haptic technology, thanks to which the device vibrates whenever gamer takes certain actions.
• 32 diverse, fun levels.
• 3 playable characters.
• Beautiful cutscenes with professional voice acting
• Multiple methods of level completion.
• A simple yet powerful “slide” interface.
• Rewarding gameplay with a high re-playability value.
• Social media implementation allowing score sharing with friends.
• Full Game Centre integration – including in-game achievements.