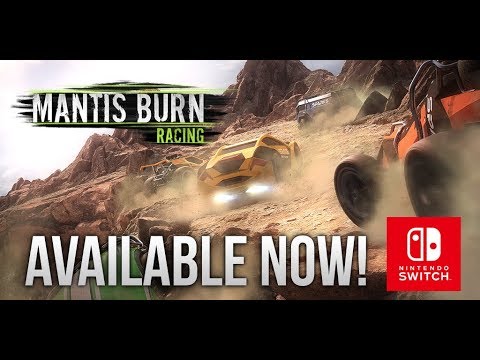 UK based indie developer and publisher, VooFoo Studios, is excited to announce that their award-nominated top-down racing game, Mantis Burn Racing®, is now available for the Nintendo Switch.

Mantis Burn Racing® is a modern top-down style racing game that combines physics-based gameplay with intuitive arcade racing in highly competitive, fast and addictive races. Get ready to prove your driving skills in 5 unique classes of vehicles over an epic 11-season single-player career with more than 150 events and 13 event types in frenetic, bumper-to-bumper races where winning is everything!

“Mantis Burn Racing on Switch features all the upgrades and content released to date in the biggest and best version of the game” said Mark Williams, Technology Director at VooFoo Studios. “The game is all about fun, fast, competitive racing and with added support for Switch specific features like Local Multiplayer and our ‘Cross-Table’ mode; it’s a perfect fit for Nintendo gamers at home or on the go.”

Mantis Burn Racing® has received praise from fans and critics alike, Hardcore Gamer called it “The finest overhead racer in years”, The Xbox Hub described it as “Nothing short of brilliant”, whilst Eurogamer call it “A fun, good-looking experience”, Flickering Myth say it “Fits the Nintendo Switch like a glove” and Team VVV deem Mantis Burn Racing® on Nintendo Switch as “The best version yet”.