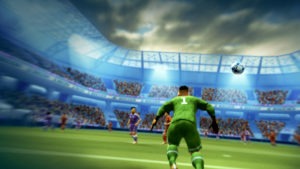 Developed by Tower Studios in conjunction with Combo Breaker and Rogue Games, Social Soccer is a fast-paced take on soccer that’s both intuitive and in-depth. The game enables players to fully control or manage a soccer team against other players online or in the same room. Having designed soccer games for more than thirty years, including Microprose Soccer for Commodore 64 and the award-winning Sensible Soccer for console and later mobile, Tower Studios’ Jon Hare wanted to create a soccer game that’s quick to jump into but with enough detail and depth that it takes time to master.
Sociable Soccer Key Features: Sociable Soccer is ultra-flexible and accessible, offering something for everyone.
Sociable Soccer is available on Apple Arcade on the App Store on devices running iOS 13.