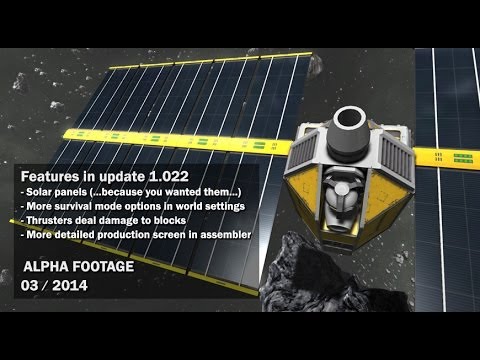 Space Engineers update 01.022 has been released today. After the request made by many players we have added solar panels. Solar panels can produce energy depending on the amount of light that they catch from the sun. Also the amount of available uranium in the world has been increased and there are more detailed survival mode options in the world settings. Thrusters can now deal damage to objects.

This video demonstrates the most important new features of this update:

Below is the full list of all the new features and fixes that have been implemented with this update:

Features
– added solar panels (energy production depends on the amount of light they catch from the sun – which depends on the angle and clear visibility to the sun)
– world generator spawns more uranium
– inventory size can now be edited in world settings
– assembler efficiency can now be edited in world settings
– refinery speed can now be edited in world settings
– thrusters now deal damage to objects, except:
* small ship thrusters that don’t damage heavy armor blocks (so you can build landing platforms)
* asteroids
– more detailed production screen in assembler
* all components and blocks which you don’t have ingots for are now shown in red
* players can see the amount of required ingots to create a component or a tool
* “Disassemble all” button that allows you to easily convert all components inside the assembler back into ingots
* new queue shortcuts: ctrl+click (add 10), shift+click (add 100)
– increased character’s damage after falling from heights (3 blocks: 32% damage, 4 blocks: 72% damage, 5 blocks and more: 100% damage = instant death)
– red overlay is shown when the player runs low on health level
– increased the uranium refinement speed by 20%
– auto-save is now disabled on multiplayer clients
– added tooltips to join game screen
– increased damage done by drill to blocks
– changed red injury-overlay texture to a less gore version

All the updates that have been added into the game until now are avaiable in the Change log list – http://forums.keenswh.com/?forum=326211

Space Engineers is available for purchase on the developer’s web site: www.SpaceEngineersGame.com/buy.html, on Steam: store.steampowered.com/app/244850 and at several other online distribution services.

Space Engineers is in alpha stage of development. Everything in the game is subject to change.