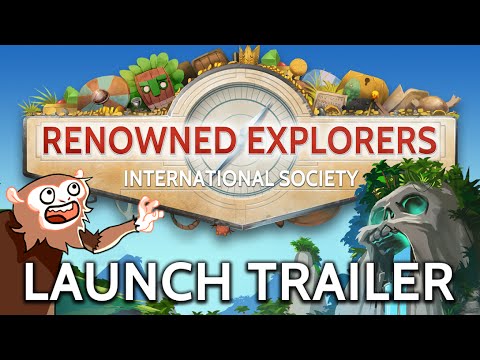 Shortly after the success of the god-game Reus, the monks of Abbey Games decided to abide with their vision by creating another original PC game of one of the classical genres. They did this by combining strategic gameplay with an adventurous theme and art style. This rare combination, together with their innovative ‘Attitude-based gameplay’, makes this game truly one of its kind.

According to Adriaan Jansen, co-founder and game designer; ‘’We took our inspiration from FTL and XCOM, plus an unlikely source; the Sims. We created a world full of procedurally generated locations to explore that feels like those of Indiana Jones and Tintin. The player can choose how to approach any encounters ahead: violently or verbally.’’

Attitude-based gameplay is a new type of tactical turn-based combat. While guiding your explorers across the globe in search for treasure you can encounter locals that require a strategic approach to deal with them, be it through a physical or social course of action.

Each explorer has his or her own expertise and character traits when dealing with the locals. Players can choose among 20 unique explorers divided into Fighters, Scouts, Speakers and Scientists. The speaker Yvonne Lefevre for example is Montreal’s cruel mistress. Assertive, intelligent and the center of attention, her charm and powerful lectures can confound any thug. Do keep in mind that your choices have an impact on your reputation.

Earn your place amongst history’s greatest explorers, such as David Livingstone, in the ‘Explorer of Legend’ ranking written up by the Renowned International Society. This, combined with the procedurally generated expeditions, strategic crew selection and many routes to fame, brings you lots of replayability.

As of today players can embark on their own adventures in Renowned Explorers, as the PC game has been released with a temporary 10% starter discount. Players that also possess the god-game Reus in their Steam, GoG or Humble Bundle inventory will receive a 25% loyalty discount on Renowned Explorers.

During the release several competitions are planned where players can win exclusive compasses and extra keys for their friends or rivals. Be sure to search for one of the five hidden treasures in-game that will earn you everlasting fame as well as a place in the Explorer of Legend ranking. Do keep in mind that it is the journey that matters…

Renowned Explorers is a strategy adventure game set in the 19th century.
Take command of a hand-picked group of disparate explorers and travel across the globe in search of legendary treasures while staying ahead of your rivals. Earn prestige in the International Society and become the world’s most Renowned Explorer!

Visit lost temples, forgotten cities and the untamed wilderness to discover magnificent treasures. Find your way past wolves, smugglers and angry locals and become known as an intrepid explorer. Every expedition has challenging encounters and your nemesis Rivaleux will take any chance to thwart your efforts.

Select your band of adventurers carefully! Each of the 20 explorers has their own expertise and character traits when dealing with conflicts. Choose among Fighters, Scouts, Speakers and Scientists and find out the best way to use their talents.

Acquire knowledge, get rich, or become famous by completing any of the procedurally generated expeditions. Use these resources to get the skills, support and equipment you need for your next endeavor.

Approach the locals carefully when you encounter them;
· Fight them with Melee, Ranged and Area of Effect attacks
· Win them over using Cheers, Charms and Compliments
· Scare them away by Insults, Taunts and Humiliation

Every encounter is a new challenge that has many different solutions and it’s up to you to build a reputation. Are you a diplomat, a schemer or a fighter..?
Start your adventure now on RenownedExplorers.com!

Renowned Explorers: International Society has the following key features;
· Explore the far corners of the world in the age of discovery, outsmart your rivals, campaign for fame and become the most Renowned Explorer of the 19th century
· Live your own adventures; get to know your explorers with their own character
traits, skills and quirks, manage their progression while hunting for the most
prestigious treasures
· Prepare your treasure hunt; collect insight, research, gold and status on your
expeditions to acquire supplies and support for the next adventure
· Attitude-based gameplay; choose the best course of action by engaging your
opponents physically and mentally using charm, deception, intimidation or a show of
force
· There is always something new to discover in the thrilling procedurally generated
expeditions, where your reputation opens up new opportunities